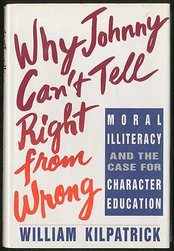 The Core Virtues program was conceived in 1992 at a very specific juncture in the ongoing education reform debate. The “Nation at Risk” report, issued by the U.S. Department of Education less than a decade before, had drawn attention to America’s failing educational system. Lack of rigor and clear standards were key themes of the report.  At the University of Virginia, E.D. Hirsch Jr. helped explain national weakness in academics, when his book, Cultural Literacy: What Every American Needs to Know (1988) drew attention to the vapid content taught in our nation’s schools.  But academic standards were just one part of the educational lacuna. Other scholars drew attention to stalled efforts in character education: a field that had been explicitly abandoned by many in the 1970s and 1980s, though historically recognized as a key component of quality education.
Boston University Professor Kevin Ryan attempted to remedy that gap, when in 1989 he founded the nation’s first center for teacher education in character formation (B.U.’s Center for the Advancement of Ethics and Character, now the Center for Character and Social Responsibility).  From SUNY Cortland, Dr. Thomas Lickona supported those efforts and urged re-commitment to the task of character development, publishing Educating for Character: How Our Schools Can Teach Respect and Responsibility.

In that same year (1992) Boston College Professor William Kilpatrick published his landmark book Why Johnny Can’t Tell Right from Wrong. More than any other scholar to that point, Kilpatrick explained with clarity and devastating precision what had gone wrong in moral education.  He wrote during a period of unusually high violent crime and during a spike in juvenile homicide as well.  But he addressed himself principally to the problem of moral apathy that characterized youth. He called on schools to reignite the moral imaginations of children, teach children to care, and he emphasized the key role of literature. Former Secretary of Education William Bennett (who had overseen the “Nation at Risk” report) reached similar conclusions and responded to that call with The Book of Virtues: A Treasury of Great Moral Stories in 1993.

Meanwhile, pathbreaking charter school legislation in various parts of the country allowed for the emergence of new schools quite intentionally designed to address key concerns of content and character. Liberty Common School in Fort Collins, Colorado and the Challenge Charter School in Glendale, Arizona were among the new charters. Crossroads Academy in Lyme, New Hampshire is an independent school example. And concerned educators in established schools such as Connie Jones in Fort Myers, Florida (Three Oaks School) and Jeff Litt in the Bronx (the Mohegan School) led their schools in retooling for content and character.  Each invoked stated missions of academic rigor and moral excellence.

That context was critical to the formulation of the Core Virtues program.   In the late 1980s, while completing her Ph.D. at Brandeis University and teaching American History at the college level, Mary Beth Klee was also concerned about the knowledge gaps displayed by undergraduates.  Reading E.D. Hirsch Jr.’s Cultural Literacy was for her an “aha” moment.  It seemed increasingly apparent that the greatest field of opportunity for positive academic and social change for the U.S. lay in K-8 education. 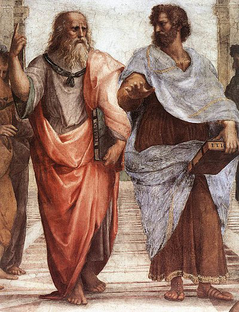 In 1991, working with other concerned educators and parents in northern New Hampshire, Klee founded Crossroads Academy, a K-8 independent school focused on content and character.  The school opened as a day school in September 1992 and was one of just three schools in the country to adopt the newly minted Core Knowledge Sequence. From the start, Crossroads sought a character education component to complement their rigorous academic foundation.  If we could speak of “core knowledge,” were there not also “core virtues”?  Mightily influenced by the advice of Plato and the work of William Kilpatrick, educators at Crossroads visualized a school day that began with intentional storytelling.  They hoped to cultivate knowledge about and love of virtue with an intentionally structured sequence of stories at Morning Gathering. The objective was to tell our stories in ways that made philosophical, developmental, and seasonal sense.

In 1992, the school began to employ a literature-based initiative that became known as Core Virtues.  Work on that program was facilitated in 1994 by a grant from the Challenge Foundation. The first published edition of Core Virtues was available to schools in 1995, when a spiral-bound version was introduced at the national Core Knowledge Conference. Though the volume has changed publishers over the years (and acquired a binding), the book has not been out of print since then, and was for purchase through Amazon.com. Core Virtues schools are now found in at least 19 states and four countries (US, UK, Kenya, New Zealand).  Some schools have been employing the program for nearly three decades.

In 2018, the Core Virtues Foundation ensured that this rich and lively program had ongoing life via the web at www.corevirtes.net.  Online we dramatically expanded the literary recommendations made to teachers.  The program is accessible free to any who are intrigued by this simple and rich approach.  The Core Virtues website spotlights far more material than is available in our book -- simply because we can keep adding to the literature recommendations daily.  Children’s literature expands daily, so the website is a platform to bring the new to light.  On this site too, we highlight heroes, poetry, holidays, and Core Knowledge connections. The website is an ever-renewed treasure trove of resources and will always be our fullest representation of the program.

2022, the thirtieth anniversary of the program's inception, brought two major innovations for Core Virtues.  First, the Core Virtues Foundation oversaw the publication of a much expanded book, one that builds on its predecessor, and will be released in August 2022.    The three-year framework of virtues and traits that structure our stories has largely withstood the test of time.  The added length of the volume mostly reflects new finds in the booming industry of children’s literature – those recommendations and more are available on our website.

Second, on July 1, 2022, the Core Virtues Foundation transitioned ownership and stewardship of the Core Virtues program to the University of Dallas (UD), with its Center for the Arts of Liberty.  We are thrilled that the only university in the nation to offer a Master's of Classical Education, sought Core Virtues as its flagship K-6 program, and is eager to expand its reach.

Many aspects of education and life have changed in the three decades since this work’s inception.   But one solid insight endures: both content and character define a quality education.  Bright, engaged, motivated students confirm that.  Test scores confirm that.  Parental response confirms that.   We take heart in the many schools that have used this program for decades and tell us it is their built-in “anti-bullying” program.  We are grateful to the numerous Core Virtues teachers and schools, who are committed to the next generation of students, and their pursuit of the true, the good and the beautiful.  We hope that this website and our work continues to serve your needs and theirs.
Core Virtues Foundation Copyright © 2018