Heroes - Lives to Learn From
June
Heroism and Humor       Lives and Laughter      Wisdom and Wit
Baseball:  Can a Game be a Hero?

The Core Virtues program uses the month of June to spotlight exemplary lives -- people who embody and integrate many of the virtues flagged in the previous nine months.  In contrast to other months, we have not historically singled out a specific person as hero/heroine because we devote reading time to many.  BUT as we move toward summer, and many children and adults prepare to immerse themselves in America's national pastime, let's reflect on the character-enhancing quality of a game!  We're thinking about the way baseball has frequently brought us together and brought out the best in us.

Baseball was played on both sides of the Mason Dixon line before the Civil War (as early as the 1840s), was a major diversion for Union and Confederate prisoners during the conflict, and even an occasion for fraternity during the conflict. Whether played in major league stadiums, college, high school or little league diamonds, the game has had enormous power to unite and to inspire us.  Intrinsically, with its 162 games per season, it is a game of perseverance as much as skill.  It has pushed us in the fields of civil rights and national defense. Find out more about how personal and national character has been shaped by baseball, and how the game has brought us together at key moments. 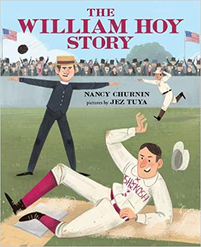 The William Hoy Story:  How a Deaf Baseball Player Changed the Game. Nancy Churnin.  Illustrated by Jez Tuya. Albert Whitman & Co., 2016. (K-3) Diligence, Perseverance and Grit
Lively illustrations in this upbeat recounting of a little-known story:  William Hoy was the first deaf player to be signed by the major leagues (Osh-Kosh in 1886).  He'd excelled at schools for the deaf and his parents wanted him to be a cobbler.  But Hoy had a passion for baseball, and an undeniable talent.  He was recruited to the majors, but was mortified one day, when he couldn't hear an umpire's call and didn't realize he'd struck out. He kept waiting for the next pitch, while the pitcher and fans laughed.  Hoy didn't hold it against his fans; instead he worked with umpires to develop hand signals for the game, so that he too would know their calls (as would fans in the distant bleachers).  He changed the game.  If grit is the combination of passion and perseverance, William Hoy is a splendid exemplar.  A welcome subtext is: a disability doesn't have to hold you back.   ​ 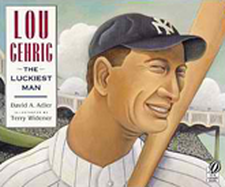 Lou Gehrig:  The Luckiest Man. David Adler.
Illustrated by Terry Widener.  HMH, 2001. (K-3)
Courage, perseverance, and optimism are all exemplified in the life of this humble, gracious, and legendary first-baseman who lost his life to the rare disease that now bears his name.  The game helped him meet his destiny, and show the nation how to deal with physical adversity. 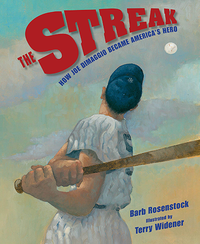 The Streak: How Joe DiMaggio Became America's Hero*. Barb Rosenstock. Illustrated by Terry Widener.  Calkins Creek, 2014. (2-6)
As the world moved toward war in 1941, Americans were riveted to the baseball diamond.  The unlikely hero was the hard-working, soft-spoken son of Italian immigrants who'd hustled to support his family in his youth (1930s), but always knew his talent was on the field.  This book is not just about this New York Yankee's unbroken hitting streak (56 consecutive games), but about the way his dogged perseverance, grace, and consistency prepared Americans for World War II. *Available on Epic! 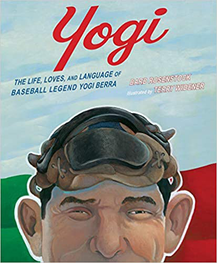 Yogi: The Life, Loves, and Language of Baseball Legend Yogi Berra. Barb Rosenstock. Illustrated by Terry Widner. Calkins Creek, 2019. (2-5) Wit, Wisdom, Perseverance, Lives to Learn From
The baseball legend who had a way with words comes to life in this entertaining picture book biography.  His life-long love of baseball pervades, and we follow determined Yogi growing up in an Italian neighborhood in St. Louis playing ball in an abandoned dump, fighting in World War II, then becoming an outstanding catcher for the Yankees.  Yogi loved baseball, but baseball players and sports-writers didn't always embrace him -- he endured pranks, insults, and general harassment, before becoming THE MAN adored by fans and renowned for his "Yogi-isms."  Yogi Berra's witticisms and wisdom:  ("It ain't over till it's over" "The future ain't what it used to be." "When you come to a fork in the road, take it." "Nobody goes there any more. It's too crowded." "It gets late early out there.") are sprinkled throughout this lively book. 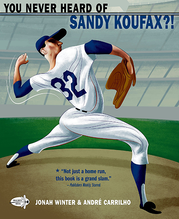 You Never Heard of Sandy Koufax?. Jonah Winter & Andre Carrilho. Dragonfly Books, 2016. (K-3)
All-star pitcher and baseball legend, Koufax was America's first renowned Jewish player. He was known for his actions and inaction on the field.  He refused to pitch on the Jewish High Holy Days, and when he said "no," he took flack for it.  A reminder of anti-Semitism as a cultural hurdle, this book also shows Koufax as a case study in "try, try again."  He did not enter the ballpark as a super-star, and was often sent back to the drawing board. His mighty pitch was born of perseverance and practice. 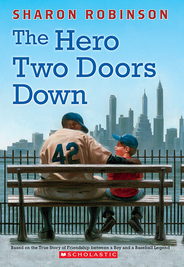 The Hero Two Doors Down. Sharon Robinson. Scholastic, 2017 (4-6)
Authored by Jackie Robinson's daughter, this book is the moving story of a friendship between Jackie Robinson, the Civil Rights pioneer of baseball (who broke the color barrier in the major leagues in 1947, when he was signed by the Dodgers) and a Jewish third grader, Steven Satlow, who lives down the street from him.  Many of the Brooklyn neighbors are worked up about a black family in the neighborhood, even if it is Jackie Robinson!  Satlow and Robinson develop an unlikely friendship and young Satlow comes to look at his favorite sport, his country, and the quest for equality in a new way. 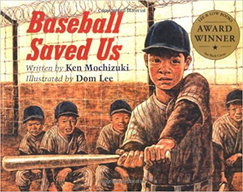 Baseball Saved Us. Ken Mochizuki.
Illustrated by Dom Lee. Lee and Low Books, 2018. (3-6)
A Japanese-American boy tells the moving story of his family’s internment in the American desert after the bombing of Pearl Harbor. In an effort to make time pass more quickly, the internees build a baseball diamond. Baseball, mastered by American children of all ages and ethnicities long before Pearl Harbor, becomes a path to dignity and self-respect. The story focuses the theme of respect regardless of race or national origin. A true story told with candor and sadness, but without bitterness. ​ 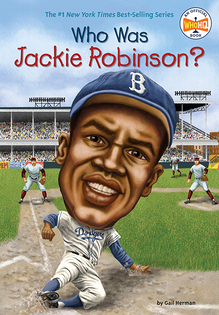 Who Was Jackie Robinson? Gail Herman. Illustrated by John O'Brien. Penguin, 2010. (112 pages)
One of the lively "Who Was" series biographies, recounts the story of baseball's first African American player -- Jackie Robinson, who in 1947, broke the color barrier in baseball, being by the New York Dodger's.  He went on to make civil rights as well as baseball history.  Readers learn about the obstacles Jackie he faced (ongoing discrimination, segregation in hotels and restaurants, scorn and derision from opposing teams and some of his own teammates) as well as his determination to overcome them with grace and dignity. 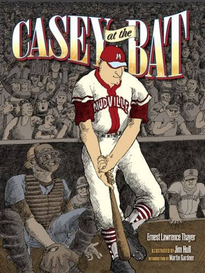 Casey at the Bat. Ernest Lawrence Thayer.
​Illustrated by Jim Hull. Dover Press, 2012. (4-6) Humility
The classic American baseball poem teaches reminds us that sometimes we need to learn to live with disappointment (which still doesn't make it fun)! 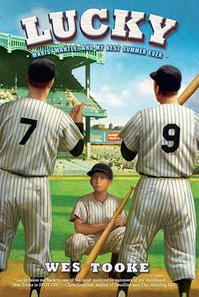 Lucky: Maris, Mantle and My Best Summer Ever. Wes Tooke. Simon and Schuster, 2011.(4-6) 192 pages  Perseverance, Honesty, Courage, Humility.
Set in 1961, young Louis May loves baseball cards, knows his stats backwards and forwards, and can lose himself for hours calculating new batting averages and RBIs based on current games. But he's not a good player.  And his newly acquired step brother lets him know it.  Imagine Louis's astonishment when he catches a foul ball at a Yankee's game and is asked to be a bat boy for the team. Louis's own life with his recently remarried dad is changing and challenging.  Lessons learned in the dugout with the players he admires (especially with Roger Maris who breaks the record for most homeruns in a single season) and the game he loves see him through:  perseverance, humility, and courage to stand up to bullies are chief among them.
Core Virtues Foundation Copyright © 2018