Martin Luther King, Jr. (1929 -1968)
On the third Monday of January, Americans honor an icon of moral and civic courage.  Dr. Martin Luther King, Jr. battled racism, segregation on the basis of race, and anything less than full acceptance of the dignity of the human person.  A Baptist minister and a student of American history, King identified with his biblical roots and his country’s ideals.  At a time when many American facilities and workplaces were still segregated by race, Martin Luther King, Jr. reminded the nation that it led the world in declaring “all men are created equal,” and that “promissory note” was due the black people.  His soaring rhetoric challenged Americans to live up to their promise of equality for all, and he died fighting for those ideals.
Our Martin Luther King, Jr. Recommendations
Teachers and parents will find many additional biographies and picture books about Martin Luther King, Jr. in local libraries and bookstores, but the ones highlighted here are recommended for their literary as well as educational value. 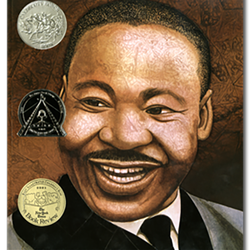 Martin’s Big Words:  The Life of Dr. Martin Luther King, Jr. *
Doreen Rappaport.  Illustrated by Bryan C Collier.
Hyperion Books, 2007.  (K-5)
In this outstanding introduction to Martin Luther King for young children, Doreen Rappaport exercises her considerable lyrical talents.  She recounts the life story of Martin Luther King, and interweaves her narrative with King’s own “big words.”  All who have read or heard King’s speeches recall the power of his voice and words, but the title derives from his youth.  King’s admired his preacher father’s skill with words and vowed that when he grew up, he would “get big words too.”  The book is stunningly illustrated, drawing the reader to its subject. This slender volume covers King’s youth, the stark reality of segregation at the time, King’s role in the Montgomery bus strike after Rosa Parks’ arrest for refusing to relinquish her seat to a white man, his ongoing role in the protest movements, and tragic death.  The book has been criticized for failing to show any whites or women marching in the protest drawing, but the field of children’s books on King is surprisingly sparse, and this is still an outstanding book. *Available on Epic! 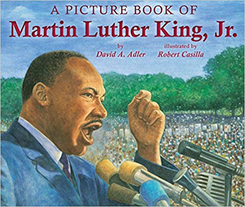 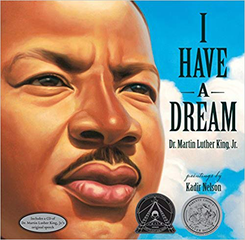 I Have a Dream. Martin Luther King Jr. Illustrated by Kadir Nelson. Schwartz and Wade, 2012. (2-4)
Kadir Nelson's astounding illustrations brings the 1963 speech to life.  (Our banner above features King at the Mall in 1963, where more than 250,000 gathered to hear him.) The book includes a CD.  Second graders, who in Core Knowledge Schools, learn the states, will be especially drawn to King's poetic references to letting freedom ring from the red hills of Georgia, the snow-capped Rockies of Colorado, curvaceous slopes of California, and much more. 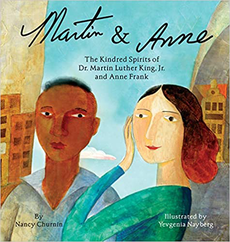 Martin & Anne: The Kindred Spirits of Dr. Martin Luther King, Jr. and Anne Frank. Nancy Churnin. Illustrated by Yevgenia Nayberg. Creston, 2019.
(3-6)
This is an unexpected pair, but Martin Luther King Jr. and Anne Frank--born an ocean apart in the same year (1929)--confronted similar challenges.  This lyrically written dual biography shows how each faced the scourge of racism and violence in their own countries with courage, kindness, well chosen words, and a love of humanity. Anne Frank left an inspirational diary published after her death (at age fifteen) in a Nazi concentration camp.  Martin Luther King Jr. bequeathed a treasure trove of letters, speeches and the powerful witness of non-violent action before he fell to an assassin's bullet at age 38.  Despite their premature deaths, each left a legacy of resistance to bigotry combined with irrepressible hope for the future.  This is a gorgeously illustrated, powerful and ultimately hopeful book. 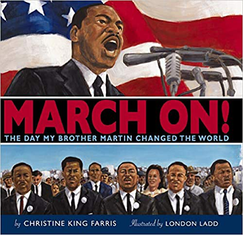 March On! The Day My Brother Changed the World. Christine King Farris. Illustrated by London Ladd. Narrated by Lynn Whitfield. Scholastic Press, 2008 (2-6)
Written by Dr. King's sister, this moving picture book focuses on just one day:  August 28, 1963, the March on Washington, and MLK's "I have a dream speech."  On that day more than two hundred thousand Americans gathered peacefully at the foot of the Lincoln Memorial to witness for freedom and equal rights for all.  The size of the crowd astounded even King. He looked out to see, as his sister put it, "a blanket of people walking shoulder to shoulder .... all kinds of folks looking like patches of color spread in a great quilt over the National Mall in Washington."  Moved by the extraordinary spectacle and the justice of his cause, King departed from his prepared text and delivered one of the greatest testaments to hope, liberty and love of country ever given.  Background gospel music from the day, King's words and the flawless narration by Lynn Whitefield make the audio verison outstanding. The audio version could be fruitfully played at an all-school assembly. 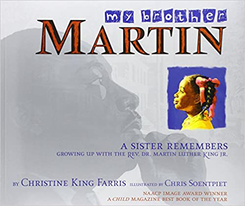 My Brother Martin: A Sister Remembers Growing Up With the Rev. Dr. Martin Luther King, Jr. Christine King Farris. Illustrated by Chris Soentpiet. Aladdin, 2006. (3-6)
Martin Luther King Jr.'s older sister shares childhood memories of growing up in a close knit family in Atlanta, Georgia.  Her memories are ones that today's children may relate to:  tinker-toys, monopoly games, childhood pranks, piano lessons, and always books.  But the reality of segregation dictated who they as black children could play with (only other black children) and where they could play (segregated parks and playgrounds).  That experience of indignity shaped the dreams and life work of Martin, who vowed to his mother that he would someday "turn the world upside down," and speak out against hatred and bigotry. Captivating, carefully researched illustrations make this  a most compelling story. 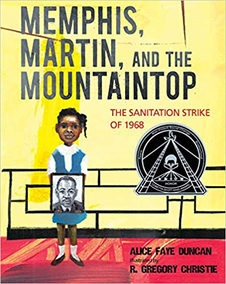 Memphis, Martin and the Mountaintop: The Sanitation Strike of 1968.
Alice Faye Duncan. Illustrated by R. Gregory Christie.  Calkins Creek, 2018.
40 pgs. (4-6) Justice, Perseverance, Courage, Black History Month
Compellingly told and vividly illustrated, this is a rich read-aloud for older students.  Two black sanitation workers die in Memphis, their tragic deaths linked to unsafe working conditions, and a strike ensues. Told in first person format by the daughter of a sanitation worker, this book gives a clear picture of what it took to ensure justice for the sanitation workers of Memphis. Martin Luther King Jr.'s visit to the city and his support for the striking laborers instills hope.  Simple but striking illustrations show the long hours marching, protests, speeches, and the many sacrifices by families of workers (now without pay), who never gave up hope for a just outcome. Finally, after the tragic death of Martin Luther King, Jr, the sixty-five day strike was settled in their favor. Well researched and riveting, this story exemplifies justice, courage, and perseverance. 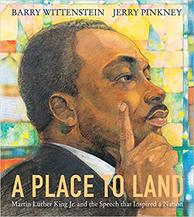 A Place To Land. MLK and the Speech That Inspired a Nation.* Barry Wittenstein. Illustrated by Jerry Pinkney. Neal Porter Books, 2019. (4-6)
A beautifully written and wonderfully illustrated story of how the "I have a dream speech" was written. Martin Luther King, Jr. "was once asked if the hardest part of preaching was knowing where to begin. No, he said. The hardest part is knowing where to end. 'It's terrible to be circling up there without a place to land.'" This book is a fascinating look back at the history behind the speech, the process of writing and delivering it, as well as its effect then and now.*Available on Epic! 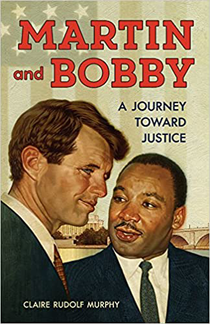 Martin and Bobby: A Journey Towards Justice. Clare Randolf Murphy. Chicago Review Press, 2018. (6-8)
This middle school chapter book is a wonderful presentation of the lives of two men who fought for justice, each using their own gifts and talents.  And sometimes disagreeing about the best path.  The book delves into civil rights politics of the 1960s, the family backgrounds of the Kennedys and Kings, and the distinctiveness of King's philosophy of non-violence. It presupposes strong background in U.S. history (which Core Knowledge students will have).  The author is much to be lauded for recognizing the power and spur of religious faith in the lives of both men. Allies rather than friends, King and Kennedy shared love of country, and their faith in the nation's founding principles comes through loud and clear.  The book captures the the back and forth of the time (civil rights protest, backlash, riot, jail time, laws for change, retribution, protest, etc.), reminding us that our present moment is not without a past.  The epilogue provides a darker spin on the current state of American politics than many will share. 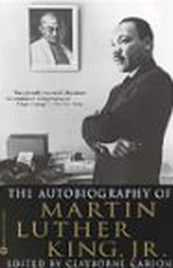 The Autobiography of Martin Luther King, Jr.  ​Martin Luther King.
Edited by Clayborne Carson. Warner Books, 2001. (6 and up)
Not written as a children’s book, this volume is still a great read for middle and high-school students seeking to understand King on his own terms.  Stanford historian Clayborne Carson assembled this insightful autobiography of Martin Luther King, Jr. from King’s various writings about himself, and has rendered an inspiring story of moral courage.  Like any good autobiography, it is ordered chronologically and flows almost seamlessly.  Teachers could choose almost any chapter to help students gain insight into the life, thought, and motivation of the twentieth century’s greatest champion of civil rights.
Core Virtues Foundation Copyright © 2018