Abraham Lincoln: A Man for All the People. Myra C. Livingston
Illustrated by Samuel Byrd. Holiday, 1993. (K-2)
A poetic retelling of the life that embodied perseverance, courage, and devotion to the ideals of his country.
​In February, when we celebrate Presidents’ Day and focus on the civic virtues,
​the Core Virtues program showcases a variety of American heroes and heroines,
who embody civic courage and concern for justice.
George Washington,  Molly Pitcher, Frederick Douglas, Susan B. Anthony, Sojourner Truth, and Jane Addams are all exemplars.

A Picture Book of George Washington.*  David Adler.
Illustrated by John and Alexandra Wallner.  Holiday House, 1990. (K-3)
A simple and clear introduction to “the indispensable man."  his youth, commander of American forces in the Revolutionary War and the first President. *Available on Epic!

Sojourner Truth’s Step-Stomp Stride  Andrea Pinkney.
Illustrated by Brian Pinkney. Hyperiond, 2009. (K-3)
An outstanding read-aloud, this true story of Belle Baumfree traces her youth in slavery, her escape to freedom, and her new life in freedom when she took the name Sojourner Truth, speaking out against slavery.  The husband-wife team of Andrea and Brian Pinkney bring the spirit of this hopeful, fiery, and deeply religious woman to life, as she stepped, stomped, and strode her way across the United States to advocate for freedom and women's rights.

Founding Mothers: Remembering the Ladies and
Ladies of Liberty: The Women Who Shaped Our Nation.  Cokie Roberts.
Illustrated by Diane Goode.  Harper Collins, 2014 and Harper Collins, 2016.
(Love of Country, 1-4)
In this pair of lively, well-written books journalist Cokie Roberts introduces children to the women who built and bettered our nation.  Her Founding Mothers book (2014) highlights the lives and accomplishments of quintessential Founding Mothers, Abigail Adams and Martha Washington, but also spotlights lesser known figures such as Mercy Otis Warren, the first person to write a comprehensive history of the American Revolution.  The expected and unexpected combine in both volumes.  In Ladies of Liberty (2017) Roberts heroines include explorer Sacajawea, African-American poet Lucy Prince, educator Mother Elizabeth Seton, reformers and defenders of the orphaned, widowed, and poor: Eliza Hamilton and Rebecca Gratz.  And many more! 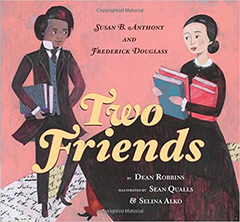 Two Friends. * Dean Robbins. Illustrated by Sean Qualls and Selina Alko. Orchard Books, 2016
(K-3) Justice, Civic Courage, Friendship
Susan B. Anthony and Frederick Douglas were neighbors in mid-nineteenth century Rochester, New York.  Each was self-taught, and grew up experiencing discrimination of the time (directed toward women and African Americans). Each worked diligently for the rights of their communities - for education, for the vote, and for equal opportunity in public life. Not surprisingly, the two became friends. In this book, on a snowy evening, they reminisce on their parallel struggles. Susan and Frederick supported each other’s causes, hopeful of success, and confident of the just nature of their endeavors.  (The book does whitewash tough stuff:  the friendship was strained to breaking when Douglass failed to support women's rights as part of the fifteenth amendment that granted black men the right to vote, but the volume is not incorrect in stating that he theoretically supported the cause; just not at that moment.) *Available on Epic!

​Moses:When Harriet Tubman Led her People to Freedom
​Carole Boston Weatherford.
​Illustrated by Kadir Nelson. Hyperion, 2006. (Justice, K-4)
A model of faith and courage, Harriet Tubman gazes at the night sky and hears the voice of the Lord, calling her to freedom. Confident of God's faithfulness, she escapes the harsh reality of slavery, and dedicates herself to freeing others.  She became for slaves their "Moses," leading them out of oppression on the Underground Railroad.  Stark, dramatic, and beautiful illustrations trace this humble woman's journey.

Adler, David. ﻿A Picture Book of Frederick Douglass.*﻿
Illustrated by Samuel Byrd. Holiday, 1993. (2-4)
Life story of one of the first African-American publishers and most important spokesmen for black Civil Rights. *Available on Epic!

​They Called Her Molly Pitcher.   Anne Rockwell.
Illustrated by Cynthia von Buhler. Dragonfly Books, 2006.  (3-5)
She was the only female sergeant in the American Revolutionary army. This is a vivid account of how Mary Hays, the feisty wife of a revolutionary soldier, accompanied her husband to Valley Forge, helping troops endure the bitter winter there, then stayed on with the soldiers through the blistering summer on the battlefield. She brought water to the wounded and heat-stricken (and acquired her nickname “Molly Pitcher”). She secured her own place in history when she took charge of the cannon when her husband was wounded in the middle of battle. George Washington made her a sergeant for her efforts. A story of faithfulness to husband, country, and ideals, as well as incredible courage.

Jane Addams:  Pioneer Social Worker. Charnan Simon.
Children’s Press, 1998.  (3-6)
An amply illustrated presentation of the civic heroine, Jane Addams, who was devoted to helping those in need.  This third to sixth grade treatment introduces young readers to the remarkable woman who founded Chicago’s Hull House, aiding immigrants and other laborers through education, day care for their children, self-help clubs and even an introduction to American art and culture.

Washington at Valley Forge.﻿  Russell Freedman.
Holiday House, 2008 (4-8)
Loyalty to and love of country is often tested under the direst of circumstances, and George Washington was up to the task.  Russell Freedman pens this compelling, amply illustrated account of the brutal winter at Valley Forge (1777).  Deprived of food, supplies, and even clothing, the revolutionary army endured enormous privation but was led by the tireless and resourceful George Washington.  His efforts to rebuild supply lines, lift morale, maintain discipline and reward his men’s faithfulness to ideals were a lasting and cherished legacy.

Jane Addams: Champion of Democracy.  Dennis Brindell Fradin and Judith Bloom Fradin.  Clarion, 2006.  (5-6)
​This young adult biography introduces students to the tireless and resourceful civic heroine, Jane Addams (1860-1935), whose life was devoted to helping others realize the American promises of opportunity and possibility.  She is primarily remembered for her work to aid immigrants with the establishment of Hull House in Chicago.  She also advocated for women’s suffrage and then civil rights (helping to found the NAACP), and worked for international peace in the early twentieth century, receiving the Nobel Peace Prize in 1935.
Core Virtues Foundation Copyright © 2018