Diligence    Self-Control & Self-Discipline    Perseverance
Over the years, we've featured monthly heroes and heroines, whose lives not only exemplify the month's virtues, but are brought to life in numerous children's works.  This year, 2021, while we are still struggling with the Great Pandemic, we can't resist highlighting just this one.  If there were more books on June Almeida, we'd list them!  But here's an amazingly diligent heroine whose pioneering work in the mid-1960s documented the existence of a brand new kind of virus:  the coronavirus.  She gave researchers in the twenty-first century, racing to find a vaccine, a leg-up on the challenge they confront. 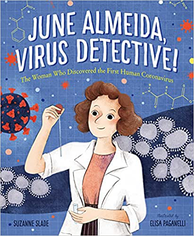 June Almeida, Virus Detective! The Woman Who Discovered the First Human Coronavirus. Suzanne Slade. Illustrated by Elisa Paganelli. Sleeping Bear Press, 2021. (2-6) Diligence, Perseverance
The true story of Scottish virologist, June Hart Almeida, who loved science from the time of her youth.   The little girl raced to school each day, consumed with curiosity about the workings of nature.  Her passion for understanding deepened when her little brother Harry died of disease and "sadness swallowed the family like a deep, dark hole." How could Harry have been saved? In the 1950s June's parents could not afford to send her to college, but she persevered in her passion for science, working first in a hospital lab, learning to use the new electron microscope.  With it, she became a pioneer in virology, designing a system to identify new viruses and photograph them with the microscope.  In 1964, she discovered and captured the image of the first human corona virus, and in 1967, published work based on her findings. She earned international fame, and a Ph.D. based on her research.  A true story of diligence that is enormously relevant for our times.
Celebrating Diligence, Self Control, Perseverance
and the 100th Anniversary of Women's Suffrage
In 1776 Abigail Adams urged her husband John "to remember the ladies," as they developed a code of laws for the new nation.  But in 1917 (when the United States entered World War I to "make the world safe for democracy") American women still did not have the vote. Many wondered what democracy in America meant exactly....   "MR. PRESIDENT, HOW LONG MUST WOMEN WAIT FOR LIBERTY?"  placards outside the White House demanded.   The fight for women's suffrage had begun nearly a century before, and the women who championed it then and now were exemplars of diligence, perseverance and LOTS of self control (not to mention courage).  "Silent Sentinels," they called themselves in the months leading up to Woodrow Wilson's second inauguration.  From January to March 1917 in any kind of weather, as many as a thousand suffragists draped in white, purple, and gold stood outside the White House in complete silence with their placards.  Organizer Alice Paul warned suffragists not to be provoked into a confrontation, but simply to endure, to stand in silence with their signs ("20,000,000 American Women Are Not Self-Governed").  The women were jeered, spat upon, their signs snatched, and some imprisoned, but they did not engage in violence.  (That's self-control!) One Congressman said  there was "something religious" about it.   They simply stood their ground.  And eventually Wilson ceded his. On August 18, 1920 the nineteenth amendment to the Constitution was ratified, establishing Women's Suffrage.   The stories of many champions for this great civic right are told below. 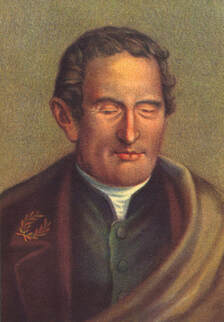 Perseverance - Louis Braille (1809-1852)
Our October hero, Louis Braille, embodied all these virtues and contributed something revolutionary to the world:  a tactile alphabet that bears his name, making production of books for the blind possible.  Young Louis opened windows on the world of learning to millions of visually impaired.
Braille’s is a story of tragic loss, determination and resilience.  Born in the early nineteenth century, the son of a French leather worker, Louis lost his sight at age three.  Though his father had told him never to enter his shop without him, young Louis (bored) wandered in one day, and found an awl and strap of leather, and began to create.  A slip of the hand sent the sharp awl flying and robbed him of sight in one eye.  An infection spread to the other eye, rendering him blind.  By four, Louis was compensating for loss of his sight with other senses and cues; he had learned to do many household chores, and his spirit was undaunted.  But when he went to school, he longed for books that he could read.  A lecture on military cryptography (using dots for sounds) at a school for the blind in Paris was the inspiration for Louis's life’s contribution.  By age twelve, Louis had invented an alphabet of raised dots that formed the basis of his system.  His alphabet today is virtually unchanged, and appropriately, it bears his name.   Here we feature some excellent children’s books about the boy who refused to give up. 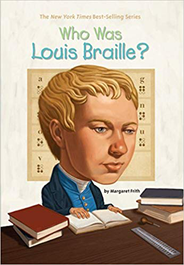 Who Was Louis Braille? Margaret Frith. Illustrated by Robert Squier.  Penguin, 2014. 112 pages (3-6)
This 112 page chapter book is written at the third to sixth grade reading level and provides a fuller accounting of Braille’s life with Frith’s characteristic pithiness and charm.
Borlaug’s Legacy
Norman Borlaug was a humble and self-effacing man. When he won the Nobel Peace Prize in 1970, he was dumbfounded, and he urged the Nobel committee to launch instead a Nobel Food and Agriculture Prize. They did not take his advice, so while he continued his own work, Borlaug pursued other avenues. He launched “The World Food Prize” in 1987. ​​

The World Food Prize organization (founded by Norman Borlaug and based in Des Moines, Iowa) awards a substantial sum annually to the individual who has “done the most to help done the most to advance human development by improving the quality, quantity or availability of food in the world.” Food Prize Laureates have made huge strides improving rice production, developing high protein maize, eradicating plant diseases and much more. Students will find a wealth of information about hunger and those who combat it on The World Food Prize website at: www.worldfoodprize.org
Core Virtues Foundation Copyright © 2018