Beatrix Potter had one! A marvelous imagination, that is. The prolific author of the Tales of Peter Rabbit was raised with her brother by artistically gifted parents in the English countryside and spent summers in the Lake District in northwest England, where she immersed herself in the wonders of nature. Beatrix lacked child friends, but adored her pets, was attentive to the mice and rabbits around her, and was a keen student of botany from an early age.  She was initially drawn to the field of mycology, the study of fungi. Her precise and colorful renderings of mushrooms (now at the Armitt Museum and Library in Ambleside) impressed peers, and are still used by mycologists to identify fungi. But in that field, her gender and amateur status worked against her.

Potter had, however, a life-long fascination with fairy tales, and her storied career in children's literature began with a letter to entertain the sick child of a dear friend.  Potter (who did not marry until her late 40s) ran out of news to share with little Noel, and penned the story of Flopsy, Mopsy, Cotton Tail, and Peter Rabbit to amuse him (1900).  His mother suggested the tale would make a good book.  Beatrix turned her hand to illustration and a star was born! This month, 120 years after the initial book's publication, we celebrate Beatrix Potter.  We showcase her not simply for having the imagination to create a fanciful world of animal heroes and heroines (27 stories in all).  We celebrate her for combining fact and wonder, the common and  the extraordinary, the known and the mysterious, in such a way as to create deeper beauty and truth.  The artfully written and beautifully illustrated Peter Rabbit tales, beloved by children for generations, are not just whimsy.  They lend hope and a sense of the world's inherent order to children everywhere.  Potter's was an imagination that stepped outside reality to make the world a better place.

The books we feature below focus on various aspects of Beatrix's amazing life and imagination -- from youthful naturalist to writer and illustrator and ultimately to sheep breeder and conservationist. 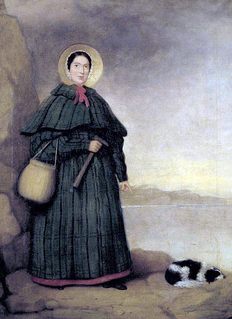 A life to learn from, paleontologist Mary Anning was a self-taught wonder. As the daughter of a British cabinetmaker on England's southwestern coast, young Mary loved hunting for fossil remains with her family. Her home in Lyme Regis yielded rich rewards. The area was noted for its Blue Lias and Charmouth Mudstone Cliffs, which after winter storms exposed "curios," interesting fossil remains ranging from ammonites to belemnites. Her brother Joseph found a noteworthy four-foot skull, but it was twelve-year-old Mary, who dug up the first intact Ichthyosaur skeleton.  At age twenty-four, she unearthed an entire Plesiosaur skeleton -- both of these remains of the Jurassic period (200 million years ago).  At a time when scholars were just beginning to grapple with pre-historic time, Mary pioneered, reading every scientific paper she could find and copying many of them by hand. She set up a shop to sell her finds and developed friendships with some of the world's leading paleontologists.  Because she was a woman (and of working class origins), Mary Anning was not even considered for membership in British geological societies, but she nonetheless became famous for her work.   Our biographies below spotlight her wonder, perseverance, resourcefulness, and just plain hard work in the face of lots of adversity.
Wonder and Joy - Jane Goodall (1934) 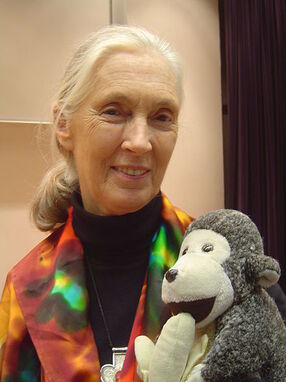 Can a toy portend the future?  Jane Goodall, the world's leading expert on chimpanzees might say "yes."  As a child in London, Jane received not a teddy bear, but a stuffed chimpanzee from her parents. "Jubilee" (pictured here) evoked in her both wonder and joy. She developed a strong curiosity about animals and Africa, and in 1957 headed off to Kenya to learn more about both. Befriended by archaeologist Louis Leakey and supported by her mother, young Jane went on to Tanzania (Gombe Stream National Park) to study chimpanzees in the wild.  She observed their human-like behavior, documenting their social bonds, emotions and personalities, and doing enough path-breaking research to earn her a slot in a Ph.D. program at Cambridge University in the heavily male field of primatology.  Jane Goodall has returned to Africa to study time and again.  Her wonder and open-mindedness have allowed her to assess aspects of chimp behavior never before revealed (for example, how chimps do armed conflict....).  She has spent the last sixty years helping human beings learn about the surprising social and family life of our primate cousins. And through it all, Dr. Goodall has been (to co-opt C.S. Lewis)  surprised by joy.  Her profound love of learning and love of life shines through in every interview. Below we feature some excellent children's books introducing them to this gentle but fearless trail-blazer in primatology and anthropology. 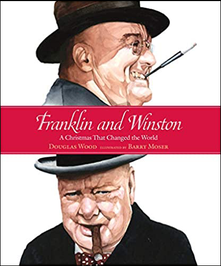 This extraordinary picture book chronicles a friendship that (as the title indicates) changed the world, and  much for the better. Two men of hope, courage and action, Franklin Delano Roosevelt and Winston Churchill embodied the best of their nations. This unusual dual biography recounts British Prime Minister Churchill's December 1942 crossing of the Atlantic to strategize with his American counterpart and soon-to-be friend, President Franklin Roosevelt.  Churchill's mother was American, and he had a special fondness for the nation he was about to visit, but it was Franklin's spark, savvy and his shared commitment to international liberty that cemented the friendship.  Together they not only inspired their citizens, but forged the greatest military alliance in history, drew up a charter for a new United Nations, appointed joint Chiefs for operations, and planned for the liberation of more than 30 nations under the yoke of tyranny.  Because of the subject matter and amount of text, this is an older children's picture book. 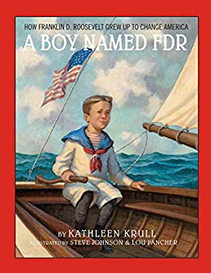 A Boy Named FDR:  How Franklin Delano Roosevelt Grew Up to Change America. Kathleen Krull.  Illustrated by Steve Johnson. Knopf, 2013. (1-5)  Hope, Compassion
This short chapter book provides an inspiring introduction to the President who led America through the Great Depression and World War II.  Krull focuses on FDR's privileged boyhood (his high spirits and cheerful disposition), early career and moves on to his battle with polio, and how it prepared him to confront hardship.  It stops short of the Depression and World War II years but clearly portrays our only four-term president as a man of compassion and hope. 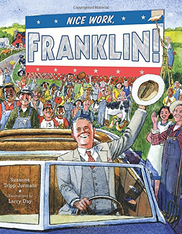 Nice Work, Franklin!  Suzanne Tripp Jurmain. Illustrated by Larry Day. Dial Books, 2016.  (2-5) Hope, Courage
A buoyant and uplifting biography of the man who inspired his fellow countrymen while he led them through hard times.  Jurmain, the author of  Worst of Friends (about Adams and Jefferson) delivers a tour de force for Franklin Delano Roosevelt -- a man who man who overcame personal tragedy  (polio), a crippling disability, and never lost heart.  He led America through the Great Depression and World War II with his signature "Happy Days Are Here Again" approach.  The illustrations are lively if not always true to life... 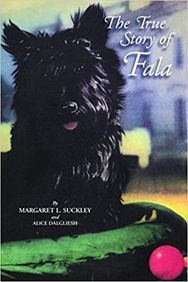 The True Story of Fala.  Margaret Suckley and Alice Dalgliesh. Black Dome Press, 2015. (3-8) Friendship, Hope, Loyalty
A reissue of the classic that introduced young readers to "a dog and his president." "Daisy" (Margaret) Suckley, friend and cousin of Franklin Roosevelt, gave him the Scottish terrier in 1940, and he became a constant companion and most photographed dog in America during World War II. FDR named him "Murray the Outlaw of Falahill" after a Scottish ancestor, a name quickly shortened to "Fala."  Daisy authored the text in the 1940s and Alice Dalgliesh's charming illustrations captured the dog's hi-jinks along with photos of the time.  An accessible way for children to look behind the scenes of the presidency during dark days, and to grow in admiration for the man whose hope and optimism was admired not just by humans, but by one special canine!

Hope - Eleanor Roosevelt (1884-1962)
Eleanor Roosevelt was no starry-eyed optimist, but the virtue of hope and an ethos of courage ruled her life.  “Do  one thing every day that scares you,” was her advice to the timid. Though she was born into a world of wealth and privilege, little Eleanor was shy and painfully conscious of “my lack of beauty.”  She compensated for her shortcomings through diligent study, a keen interest in the life of her nation, and an eager will to be useful by improving the lot of the less fortunate.  Eleanor was initially thrust into public life when she married Franklin Delano Roosevelt (first governor of New York and then President of the United States).  As First Lady, she championed working women, wrote a weekly column advocating for the neglected, and after her husband’s death chaired the U.N. Committee that drafted the Universal Declaration of Human Rights.  She maintained a steadfast hope in the future and in the progress of her nation’s ideals.  Two splendid books for children chronicle the life of this witness to hope.  The first is a stunningly illustrated biography for young children, and the second, a nuanced, warmly told portrayal of this extraordinary woman.
Core Virtues Foundation Copyright © 2018