Christmas, the Christian celebration of Jesus's birth, falls on December 25, and has been the well spring of many beautiful stories of faith, hope, and charity.  Mary and Joseph, poor pilgrims on their way to Bethlehem, are recipients of kindness from an innkeeper who finds a stable for the Christ child's birth.  The child's birth, a lowly savior welcomed by shepherds and kings, has been the inspiration for numerous beautiful stories, many of which emphasize seeing the face of God in those in need.

Schools of faith will have greater latitude in choosing from the books below, but many public schools will find books such as The Christmas Candle, The Gift of the Magi, A Christmas Carol, or others to be wonderful choices in a month that celebrates generosity, charity, and service. 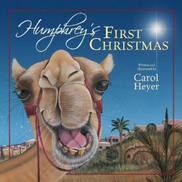 Humphrey’s First Christmas. Carol Heyer
Ideals, 2010. (K-2) Humility, Generosity.
​A playful tale of the First Christmas as experienced by a proud and self-important camel. Humphrey is charged with carrying the goods of the three kings on their journey to Bethlehem, and is annoyed to be so put upon. Children will both laugh and be touched by the turn of events in which Humphrey meets the Christ child.  Irresistible illustrations. 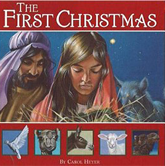 The First Christmas. Carol Heyer
Ideals, 2003. (K-2)
Carol Heyer’s luminous artwork and simple, lyrical text bring the biblical story to life for young children.  The account is faithful to the gospels and is told as the story of the Savior’s birth. ​ 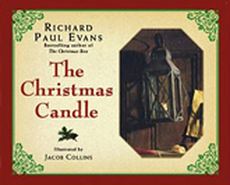 The Christmas Candle. Richard Paul Evans
Illustrated by Jacob Collins. Simon and Schuster, 1998. (K-4)Generosity
This is the hauntingly illustrated story of a self-satisfied young man, who comes to understand that “all from great to small belong to one family.”  Thomas is returning to his comfortable home on a cold Christmas Eve and shoves a beggar aside in order to enter the chandler’s shop.  He needs a candle for his lantern to light his way home. The chandler warns him that the simple one he chooses, although inexpensive, may be costly.  It is. The candle turns the face of each needy person into a family member, and by the time he returns home, Thomas has given away all, and even goes back to help others he was unable to assist. Simple but rich text and dramatic illustrations. 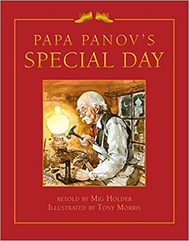 Papa Panov’s Special Day﻿. Tolstoy, Leo.
Illustrated by Tony Morris. Lion USA, 1988. (K-3) Generosity, Compassion
A poor old cobbler has a vision that the Christ child will come to him on Christmas Day. The only ones to come are a poor woman, a cold street-sweeper, and a hungry friend. He extends hospitality to each, but ends the day disappointed—only to discover that indeed his wish came true! 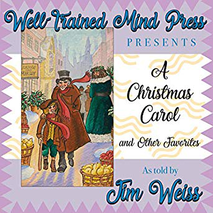 “A Christmas Carol and Other Favorites.” CD.
Greathall Productions, 1996. (K-6)
Weiss’s fine retelling of Dickens’ A Christmas Carol, as well as O.Henry’s Gift of the Magi give new depth to the spirit of love that animates the holiday season. 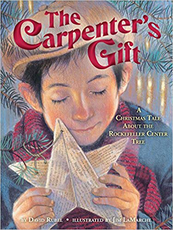 The Carpenter’s Gift: A Christmas Tale about the Rockefeller Center Tree. David Rubel.  Illustrated by Jim LaMarche. Random House, 2011 (K-4) Generosity, Service, Compassion
​The spirit of giving comes to life in this fictional tale set in the depths of the Depression.  A young boy, Henry, and his father cut down spruces to sell in Rockefeller Center (1931).  The family is living in a shack outside of New York, but they donate several large left-over trees to construction workers who allow them to sell on their site. The workers return the favor by building a true home for the boy’s family with wood from their construction site.  Henry is so touched by their actions that he plants a pinecone next to the home which becomes a very large spruce.  Years later he’s approached to donate his tree to Rockefeller Center, and can only bring himself to part with it when he learns that at season’s end, its timber will be used to build a home for a family in need.  Gorgeous illustrations and wonderful background on the Rockefeller Center tree. 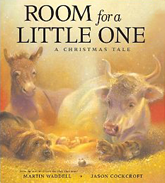 Room for a Little One: A Christmas Tale.  Martin Waddell and Jason Cockcroft
Margaret Elderberry, 2006. (K-2)
A warm and imaginative story featuring the Kind Ox, who offers room at the stable to any needy little one. Mary and Joseph, but mostly the baby Jesus, benefit!  Simple text, glowing illustrations. 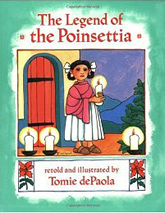 The Legend of the Poinsettia. Tomie dePaola
Puffin, 1997.  (K-3) Generosity, Faith
Tomie dePaola’s bold artwork brings this touching tale to life.  A poor Mexican child is too embarrassed to enter the Christmas procession for the Baby Jesus, because she has no gift to offer.  Urged by a kindly stranger to take part, she gathers a bouquet of weeds, and upon presentation at the crèche, the humble stems are transformed to a magnificent bouquet of poinsettias. 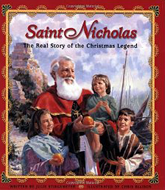 St. Nicholas: The Real Story of the Christmas Legend.  Julie Stiegemeyer
Illustrated by Chris Ellison. Concordia, 2003.  (K-3) Generosity
​A young child’s introduction to the real St. Nicholas, fourth century bishop of Lycia, who helped provide a dowry for the daughters of a local villager, and whose generosity is commemorated in tales of Santa Claus. 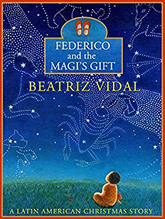 Federico and the Magi’s Gift.* A Latin American Christmas Story. Beatriz Vidal. Knopf Books, 2004 (K-3)  Holiday, Hope
Four-year-old Federico is anxiously awaiting the arrival of the Three Kings, who (legend) visit the home on the twelfth night of Christmas, and bring gifts.  He is anxious because of his past misbehavior, and now he fears that the Magi will not bring him his wish of a toy horse. "Perhaps if you promise to behave better next year," his father prompts...  In his heart, Federico vows to do better.  Vidal's magical illustrations of the night sky and Federico’s home life will make this a Christmas favorite. *Available on Epic! 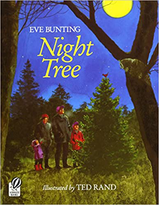 Night Tree.  Eve Bunting.
Illustrated by Ted Rand.  HMH, 1994. (K-3)  Generosity, Stewardship, Christmas
Set in the 1960s, a family drives to a quiet forest where they decorate a tree with popcorn, apples, tangerines, sunflower seed balls -- all threaded and prepared as a gift for the forest animals.  A lovely story of a family tradition that looks to the needs of forest friends.  Eve Bunting's lyricism and Ted Rand has surpassed himself with the illustrations. 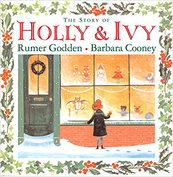 The Story of Holly and Ivy. Rumer Godden.
Illustrated by Barbara Cooney. Viking, 1985. (K-2)Hope
Set in the English countryside, Ivy, an orphan, seeks a home for the holidays. Toys come to life and Holly (a doll) finds a new home for both of them. 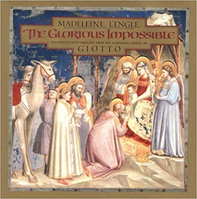 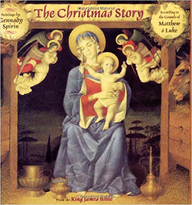 The Christmas Story: From the King James Version.  Henry Holt
Illustrated by Gennady Spirin, 2008. (2- 5)
In this lovely volume, the Christmas story is recounted using the gospels of Luke and Matthew.  Exquisite and intricate illustrations. 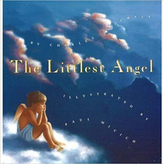 The Littlest Angel. Tazewell, Charles.
Illustrated by Paul Micich. Ideals, 1991. (2-4) Generosity
The smallest angel in heaven gives up his most prized possession as a gift for the Christ child. 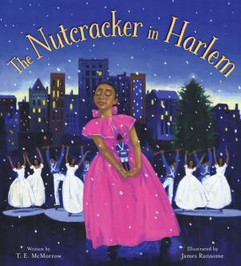 The Nutcracker in Harlem.* T.E. McMorrow. Illustrated by James Ransome. Harper Collins, 2017.  (2-4) Holidays, Wonder, Black History Month
McMorrow has marvelously recast the Nutcracker story in Harlem of the 1920s.  An African American family steeped in jazz gathers on Christmas Eve to sing and celebrate.  Young Marie is given a nutcracker.  The rest unfolds in wondrous joy.  The watercolor illustrations bring the Harlem Renaissance to life, and deliver a new twist on classic. *Available on Epic! 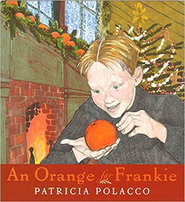 An Orange for Frankie. Patricia Polacco.
​Philomel Books, 2004 (2-4) Generosity, Compassion
Patricia Polacco’s vibrant pastels draw the reader into the heart of this family story set in the Depression. The Stowell family, with their 9 children, eagerly await Christmas. Pa has gone off to  Lansing to get the Christmas oranges. Ma feeds not only the family but also a group of hobos from the local train stop. Frankie (the youngest) helps distribute coffee and notices one man has no shirt under his coat. He gives the man the very sweater his sister had made for him.  The family’s generosity is returned when the train delivers Pa and the oranges in the midst of a snowstorm. Frankie manages to lose his orange and the family makes sure he is able to share the Christmas oranges. A touching story with so many levels of generosity. 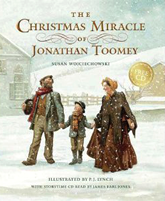 The Christmas Miracle of Jonathan Toomey. Susan Wojciechowski
Illustrated P. J. Lynch. Candlewick Press, 2007. (3-5) Generosity
Jonathan Toomey is a reclusive, no-nonsense wood-carver, whose insular life (he is a widower) is disturbed by the arrival of a young widow and her six year old son. They ask that he carve them a Nativity scene, and the widow requests that her son, who aspires to be a  wood carver, be able to watch him work. Jonathan Toomey harumphs at first, but allows the child into his shop and heart, and finally, creates a wonder – extraordinary wooden sculptures of the Holy Family. The widow and her son (and the spirit of the holiday) are the ultimate miracle workers. By allowing Jonathan to give the gift of self and service, they call him back to, but beyond himself. Extraordinary text and illustration. 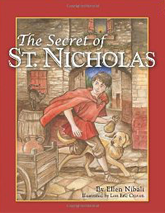 The Secret of St. Nicholas. Ellen Nibali
Illustrated by Lon Eric Craven. Fairand Books, 2010. (3-5)
Historically based introduction to St. Nicholas by a master-story teller and talented illustrator.  Recounts the story of Nicholas’s attempt to rescue three daughters who were to be sold into slavery, and his emergence as bishop of Lycia. 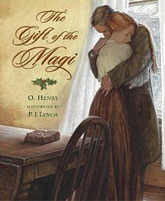 The Gift of the Magi. O. Henry
Illustrated by P. J. Lynch. Candlewick, 2009. (4-6) Generosity
Two penniless newlyweds, Della and Jim, seek the perfect gift for each other for Christmas. Each finds exactly the gift the other will love, but they have no money to purchase it unless they sell the treasures that mean the most to each of them personally. A poignant story of selfless giving, and a comedy of errors too. 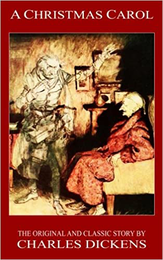 A Christmas Carol. * Charles Dickens.
Illustrated by John Leech. Tole Publishing, 2019. (4-6) Generosity, Service
Miserly, self-centered Scrooge learns to look beyond himself and his own well-being, when Christmas Eve affords him the opportunity to revisit his past, present, and peek ahead to his grim future if his life is unchanged.  This unabridged version of Dickens’ classic tale weaves timeless text with outstanding illustration. The combination of Dickens poignant story and Leech’s Rembrandt-like illustrations make this the perfect holiday read-aloud for the older grades.*Available on Epic! 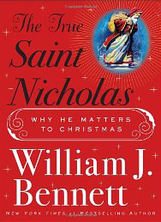 The True Saint Nicholas:  Why He Matters to Children. William J. Bennett
Howard Books, 2009. (5-Adult)
An older grade overview of the historical St. Nicholas by one of America’s leading educators.  The book treats his life, legends that sprang up about his deeds, and his ongoing legacy.
Core Virtues Foundation Copyright © 2018