"Labor is the great source from which nearly all if not all human comfort and necessities are drawn." Abraham Lincoln

September's Labor Day holiday invites us to reflect on the dignity of labor, and on the contributions of many who have labored long and hard for their families and their communities.   It's important for kids to understand that all jobs - no matter how "menial" - are worthy of respect -- loggers, lamplighters, potters, paperboys, bobbin girls, and mill workers are all featured here.  The literature we recommend this month brings home this important theme.  It also looks back to a time when kids entered the labor market at an early age to support their families. Nowadays child labor laws protect the young and encourage education, but it is worth remembering that kids too built our nation, and that each day the work they do at home and school matters. 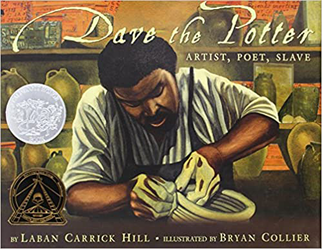 Dave the Potter: Artist, Poet, Slave. Laban Carrick Hill.
Illustrated by Bryan Collier. Little, Brown and Co, 2010. (K-3)
Diligence, Perseverance, Black History Month, Lives to Learn From
Sparse but poetic text tells the story of Dave, a potter, poet and slave on a nineteenth century South Carolina plantation.  He finds beauty and meaning in the work of his hands.  We follow him as he starts a pot from clay in the ground – mixing, pounding, shaping until finally, he  inscribes the pot with a few lines of poetry he has composed. Dave was a prolific potter, whose works (many of them quite large and all over 175 years old) are in museums.  This true story is beautifully illustrated in rich watercolors that bring to life Dave's physicality and the strength of his pots. 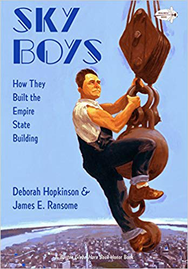 Sky Boys: How They Built the Empire State Building. Deborah Hopkinson. Illustrated by James E. Ransome. Schwartz & Wade, 2012.
​(K-3) Hope, Love of Country
It’s the Depression and times are tough, but one project offers hope:  a new building rising from the ground at the rate of one story per day.  A young boy is fascinated, brings his jobless father to see the wonder, and wondrous things result.  Bold illustrations and lyrical text inspire awe for one of the greatest construction projects ever and for the people who pulled it off. 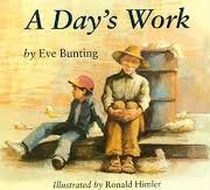 A Day's Work. Eve Bunting.  Illustrated by Ronald Himler.  Clarion, 1997.  (K-3)  Honesty, Perseverance, Compassion
Francisco's grandfather is newly arrived in America, doesn't speak English, but is looking for work.  Francisco tries to help him get a job by lying about his abuelo being a gardener; the older man is hired as such.  The employer is not happy with the results, when child and grandfather uproot the plants instead of the weeds.  The grandfather comes to understand what has happened and tells his grandson: "we do not lie for work."  They will return the next day to make right their task as "the price of a lie."  And they truly do.  (Grandfather is a carpenter who leaves things much restored.)  A wonderful inter-generational tale of an immigrant child trying to help, but needing to learn some lessons of his own.  Told with sensitivity and dignity. 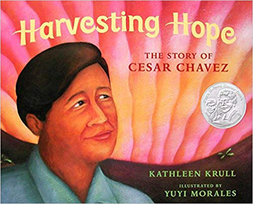 Harvesting Hope. The Story of Cesar Chavez. Kathleen Krull.
​Illustrated by Yuyi Morales Harcourt, 2003 (1-3) Responsibility, Courage, Lives to Learn From
Cesar Chavez grew up on his family’s ranch in Arizona. In 1937, at the depths of the Depression, a devastating drought took the farm into foreclosure, and the family moved to California to work on other people’s farms. Migrant families worked hard, but at this time of Depression, they were underpaid and unwelcome in the towns and schools. Cesar left school after eighth grade to work in the fields, so his mother wouldn't have to. He listened to those who called for reforms, and himself began to speak out for fair hiring and higher wages for farm workers. Cesar espoused non-violence in the quest for justice, leading a march from Delano to Sacramento with thousands of farm workers for fair wages. This lead to the formation of the United Farm Workers Union. It was a great victory and the beginning of reform for the industry. Vibrant, mural-like illustrations. 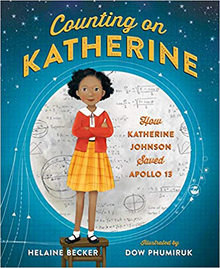 Counting on Katherine: How Katherine Johnson Saved Apollo 13.*
​Helaine Becker. Tiemdow Phumiruk. Henry Holt & Co. 2018. (1-4) Diligence, Perseverance, Lives to Learn From.
Katherine was always counting - math made sense to her. She loved learning about it and was frustrated when it came time for her to go to high school because her town’s high school wouldn’t admit black students. Her father worked night and day to earn enough to move the family to a town with a black high school. Katherine became a teacher, but still dreamed of solving bigger math problems. Finally, NASA advertised for a “computer” – a woman to do basic math calculations needed for space flight. Katherine's skill landed her the job, and now she was in a place where she could make a difference. She worked her way up from basic computing to planning the path of the Mercury space missions. Her vision and talent as a mathematician made her a great asset to the space program, and key to the Apollo 13 return.*Available on Epic! 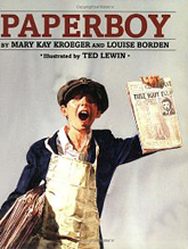 Paperboy. Mary Kay Kroeger and Louise Borden.
Illustrated by Ted Lewin. Clarion, 1996.  (2-4)Responsibility
Lewin’s lush watercolors bring Kroeger and Borden’s touching story to life.  In 1927, confident young Willie Brinkman signs up to hawk the “Fight Extras” (special edition newspapers) that will report results of the boxing match between his hero Jack Dempsey and rival Gene Tunney.  Willie fully expects Dempsey to win, is heartbroken by his loss, and faces the agonizing prospect of showing up for work to hawk the victory of Dempsey’s challenger.   This is a story of personal responsibility, faithfulness to duty, and just plain doing the right thing as he conquers his own desire to simply stay home, and reaps an unexpected reward. 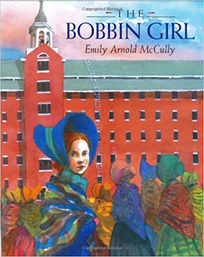 The Bobbin Girl. Emily Arnold
McCully Dial Books, 1996 (3-6) Diligence, Courage, Respect
Ten-year-old Rebecca goes off to work as a bobbin girl in the Lowell (Massachusetts) textile mills in the early nineteenth century.  Rebecca's mother runs a boarding house for mill girls, and we get an up-close and personal view of mill life -- the noise, the long days, the stuffy rooms, and the unrelenting physical demands on workers. In the evening, around the table, we learn about the girls goals and plans, how they strive for self reliance and to create a better life for themselves (reading, attending lectures).  When mill owners cut wages, the ladies go on strike.  This is a great slice of history especially for fourth grade Core Knowledge students who study early industrialization.  Emphasis on the courage of these young women, who each day returned to the mills.  The text and context makes this an older child's picture book. 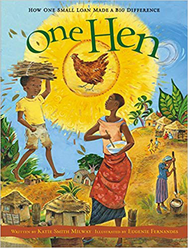 One Hen: How One Small Loan Made a Big Difference. Katie Smith Milway. Illustrated by Eugenie Fernandes.  Kids Can Press, 2008.  (2-5)   Diligence
Based on a true story from Ghana, this brightly illustrated tale is of a poor, fatherless boy named Kojo, whose village offers “microloans” to help villagers help themselves (by investing in items that will bring improve their livelihood).  Kojo’s mother gets such a loan, and her son uses a share of it to buy one hen.  Through diligent effort and resourcefulness, he builds (over time) one of the largest poultry farms in Ghana, and is able to employ many and pay the taxes that will build roads and hospitals. A window into west Africa and a wonderful story of diligence, resourcefulness and cooperation. 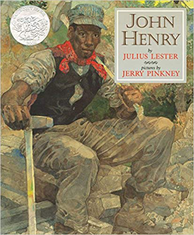 John Henry. Julius Lester
Illustrated by Jerry Pinkney. Dial Books, 1994. (2-4)Perseverance
A humorous, “tall-tale” version of the African-American folk hero of the railroad age, who “died with a hammer in his hand.” John Henry’s determination and will to work come shining through. Lester’s closing: “It’s not the dying, but how you did the living that counts.” 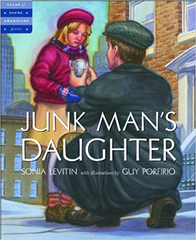 Junk Man's Daughter.* Sonia Levitin.
Illustrated by Guy Porfirio. Sleeping Bear Press, 2007.
Perseverance, Diligence 2-4
A classic immigrant tale of a family leaving the Old World to find "the streets of gold" in
America, and instead encountering hard times. We see them through the eyes of
daughter Hannah, who after a month in America, accuses her father of lying to them about the opportunities ahead. But Dad (a teacher in the old country, but still learning English) is resourceful and starts a family business collecting junk for resale. The kids contribute long hours of labor after school and the Abrams family does well. This is a story of a family working together to create their future. 21st century kids will be struck by their teamwork, hard work, and maybe notice that their own lives are just a little easier than this family's. *Available on Epic! 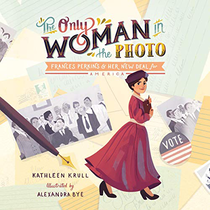 The Only Woman in the Photo:  Frances Perkins & Her New Deal for America.  Kathleen Krull.  Illustrated by Alexandra Bye. Atheneum, 2020.  (2-5)  Lives to Learn From, Justice, Compassion
Krull brings to life the fascinating story of America's first female Cabinet secretary.  Frances Perkins, who served as Secretary of Labor under Franklin Delano Roosevelt for twelve years, was a shy and compassionate child. Her best friend's family (Italian immigrant) was not as well off as her own, and when she saw suffering around her, she longed to help.  Frances, who needed to be pushed to speak up, took to heart her grandmother's advice:  "Speak up, when you see something wrong."  and "When someone opens a door for you, walk through it."  As a young woman, she worked in Jane Addams' settlement Houses in Chicago.  She worked hard as FDR's Labor Secretary to eliminate child labor, improve workplace safety (especially after the Triangle Shirtwaist factory fire), establish minimum wage laws, and pensions for the elderly.  The author goes too far when she credits Frances Perkins as architect of the New Deal ("her New Deal") but she was the Irreplaceable Woman in the Cabinet and the only woman in the photo. Because of the content, it's a 2-5 pick. 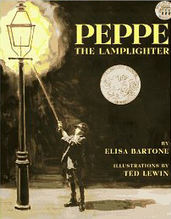 Peppe the Lamplighter.  Elisa Bartone
Illustrated by Ted Lewin.  Harper Colllins, 1997. (2-4)Respect
An Italian immigrant child in Manhattan wants to help his sick father support their family at the turn of the century.  In the days before electric lighting, Peppe eagerly accepts a job as a street lamplighter. “He works with care.  With each lamp lit, he sees himself lighting a small flame of promise for the future.” But the boy’s father is ashamed that his son is engaged in such “menial” labor.  A dark night and a lost sister, help both father and son understand that all work is deserving of respect.  Starkly and dramatically illustrated.

Fire! The Beginnings of the Labor Movement. Barbara Diamond Goldin,
Illustrated by James Watling. Once Upon America Series. Viking, 1992 (4-6)
Freyda works at the Triangle Shirtwaist Factory and attends meetings to help organize the union to improve working conditions. Told through the eyes of a Jewish immigrant family, this slender chapter book brings to life the famous fire of the early 1900s that killed 146 women and led to the banning of sweatshop working conditions. In September, when we focus on the dignity of labor and respect, this is a good reminder of horrible labor conditions in the early 20th century.  A story of perseverance, courage, and ultimately progress.
Core Virtues Foundation Copyright © 2018