The Luck of the Irish

As the snow melts and mud sullies our paths, celebrate the abiding green of Ireland!
​St. Patrick, the luck of the Irish, and the wisdom of Irish sages are all just a story away.
​These are K-4 classics. 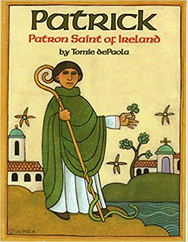 Patrick, Patron Saint of Ireland. Tomie dePaola.
Holiday House, 1994.
Tomie dePaola’s lively historical biography is a good introduction to Ireland’s legendary saint and hero commemorated on March 17th.  We follow Patrick’s life from his kidnapping and enslavement as a youngster, to his escape from slavery, then his return to Irish shores as a bishop. 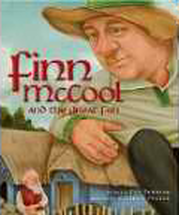 Finn McCool and the Great Fish.*  Eve Bunting.
Illustrated by Zachary Pullen.  Sleeping Bear Press, 2011.
Eve Bunting, who is Irish herself, tells this whimsical tale of a gentle giant who is extraordinarily helpful, but not terribly bright (something of “turnip head”) seeking wisdom from an old man who knows it source.  Lyrical, charming and beautifully illustrated. *Available on Epic! 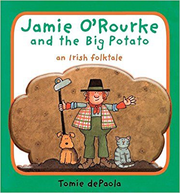 Jamie O’Rourke and the Big Potato.  Tomie dePaola.
Puffin 1997.
Irish humor and the lilt of Irish laughter are all over this silly book, in which a lazy Irish farmer learns to be careful of what he wishes for! 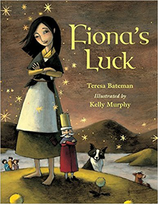 ​Fiona’s Luck.*  Teresa Bateman.
Illustrated by Kelly Murphy.  Charlesbridge Publishing, 2009.
Cleverly illustrated and magically narrated, this is the unlikely tale of a time when “the big folk” were using up all the luck in Ireland, and the King of leprechauns decides to squirrel what remains away in a trunk.  Beset by hard times (the potato famine), the Irish suffer, and a resourceful Fiona sets out to recover luck from the leprechauns.  She makes her own luck in a charming and charmed tale.*Available on Epic!

Saint Patrick and the Peddler﻿. Hodges, Margaret. ﻿
Orchard Books, 1993. (2-6)
Delightful St. Patrick’s Day story set in Ireland at the time of the potato famine. St. Patrick calls a poor peddler on a quest. Peddler follows and is rewarded for his faith and faithfulness. 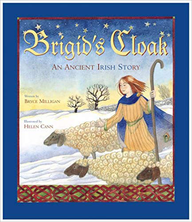 Brigid's Cloak.  An Ancient Irish Story. Bryce Milligan. Illustrated by Helen Cann.  Eerdmann's Books for Young Readers, 2002.  (K-4)  Generosity, Diligence
A lyrical retelling of the Irish saint's life and legend.  Tradition has it that on the night Brigid was born (fourth century A.D.), a Druid wizard visited her mother to present her with a blue cloak as a symbol of God's favor on her daughter. Years passed and Brigid, a humble shepherdess, wore the cloak each day as she tended her flocks.  One night during her prayer Brigid is transported to first century Bethlehem and is working at the Inn, where Joseph and Mary seek shelter.  She procures the stable for them and wraps a shivering Mary in her own blue cloak, and the Christ Child is born. Our Lady thanks this "child of the West" for her generosity. When Brigid wakes from this vision in her own stable by her own sheep, she finds the tattered blue cloak she had worn fully restored and covered in golden stars.  The cloak was a source of many miracles during Brigid's lifetime and is kept now in the Cathedral in Bruges, Belgium.  Vivid illustrations bring the lovely tale to life.  Excellent for December with its emphasis on generosity, as well as Christmas. 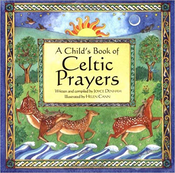