Faith and hope are key themes of the feast of Passover.  In 2020, the Jewish holiday will begin at sundown on Wednesday, April 8, and conclude the evening of Thursday, April 16.  Millions of Jews in the United States, and worldwide celebrate this major holiday with a special meal (seder), traditional foods (such as unleavened bread), readings, prayers, and rituals.  Their observance commemorates the Biblical story of Jewish deliverance from bondage in Egypt, led by Moses.  Jews are often kind enough to invite non-Jews to their tables to celebrate with them.

Public and independent schools have no obligation to teach about the Passover holiday, but many schools (public and private) consider knowledge of "the Exodus" a staple of cultural literacy.  Core Knowledge schools cover this material (in connection with ancient Egypt and World Religions) in first grade.  Teachers who wish to teach about Passover in non-Hebrew schools might preface readings by saying:  "Here's what Jews around the world are celebrating this month.  This is the story that gives life to their celebrations.  Many great artists and writers, as well as believers, have been inspired by it." When the books are narrated from the standpoint of a believer, simply say so.

We offer a variety of books, some of which will be more suited to Schools of Faith than public schools, but teachers will be the best judges.  This is a work in progress.  We will be adding more books as they come to our attention:  feel free to submit recommendations! 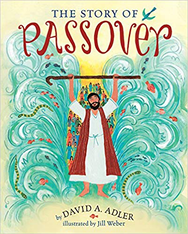 The Story of Passover.* David Adler. Illustrated by Jill Weber.
Holiday House, 2015. (K-3) Schools of Faith, Passover.
A straightforward retelling of the Passover story. Beautiful illustrations add great detail to the story. Adler also includes information about modern day celebrations and how the Seder meal symbolizes the story of the Exodus.*Available on Epic! 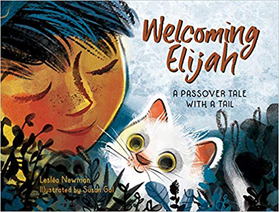 Welcoming Elijah. A Passover Tale with a Tail.*  Leslea Newman.
Illustrated by Susan Gal. Charlesbridge, 2020.  (K-3)
A lovely  tale of a Jewish family celebrating the Passover Seder in a warm home, and a stray cat echoing aspects of the celebration outside (obviously longing to be inside).  "Inside the boy drank grape juice./Outside the kitten lapped a puddle." The story charts the progress of the seder, introduces children to its traditions, ending with the custom of opening the door to the Prophet Elijah, and guess who rushes in?  Lively charcoal, blue, gold digital collage illustrations. Can be read in non-religious school settings.*Available on Epic! 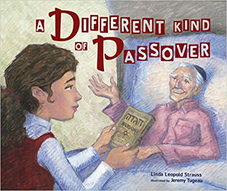 A Different Kind of Passover* Linda Leopold-Strauss.  Illustrated by Jeremy Tugeau. Kar-Ben, 2017 (K-3)Loyalty to Family, Holidays. *On Epic!
Jessica is looking forward to the ritual of Passover, where for the first time she will ask the four questions in Hebrew. But her grandfather has just returned from the hospital and cannot join them at the table. It's usually his job to answer the Passover questions.  Jessica finds a way to include her grandfather in the rituals and the family feast is even more special. 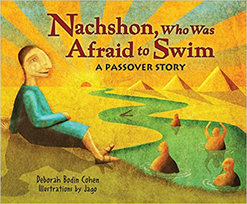 Nachshon, Who Was Afraid to Swim. A Passover Story. By Deborah Bodin Cohen. Illustrated by Jago. Kar-Ben Publishing, 2009. (K-3)   Courage, Schools of Faith, Passover
Set in ancient Egypt when Jews were held as slaves, Nachshon is a brave Jewish boy longing for freedom. He is not afraid of spying on the Egyptians but he is afraid of swimming, and stays away from the Nile River. When Moses appears to lead the Israelites out of Egypt, Nachshon isn’t afraid of the ten terrible plagues. But when they finally escape, and come to the Sea of Reeds with the Egyptian army in hot pursuit, Moses orders them forward, and Nachshon confronts (and overcomes) his fear of the sea. Engaging and bright illustrations. (Excellent with Grade 1 unit on Ancient Egypt, and Introduction to World Religions) 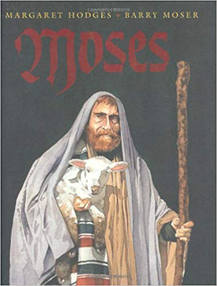 Moses. Margaret Hodges.
Illustrated by Barry Moser. Harcourt, Inc, 2007. (K-3)
Obedience, Faith in God, Courage
Stunning watercolors tell the story of Moses’ life from birth to leading his people to the Promised Land. Moses’ courage and trust in God shine in this simple telling of this great story. 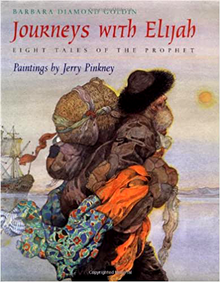 Journeys with Elijah: Eight Tales of the Prophet. “A Disorderly Table,” Barbara Diamond Goldin. Illustrated by Jerry Pinkney. Harcourt Brace, 1999. (2-4) Hope
In this charming tale, a kind-hearted, childless couple longs for a child. They open their home to a poor stranger on Passover and extend to him every kindness. They are puzzled and angered by his parting blessing that “when I come again, your table will be disorderly.” But they do not show their anger, not wishing to spoil their good deed, and find themselves rewarded with a new baby by the next Passover. When the visitor returns the next year, they now understand his words and recognize him as Elijah. 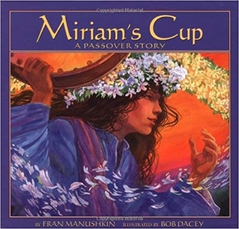 Miriam’s Cup: A Passover Story. Fran Manushkin. Illustrated by Bob Dacey Scholastic Press, 1998. (2-4) Hope, Schools of Faith, Passover
As the Pinsky family prepares for the annual Seder meal, young Miriam’s mother tells her the story of the prophetess Miriam. Jewel-toned watercolors bring depth and beauty to the story of Miriam as prophetess, and protector of baby Moses, as well as the role she continued to play praising God as the freed Jews crossed the desert in their forty year trek. God gave her a special well to provide water for the Israelites. The child Miriam in the story receives a special cup for the Seder to commemorate this. The back cover has the music for Miriam’s Song by Debbie Freedman.
Core Virtues Foundation Copyright © 2018