Poetry lifts the veil from the hidden beauty of the world,
and makes familiar objects be as if they were not familiar.
Percy Bysshe Shelley

"You will never be alone with a poem in your pocket," John Adams told his son John Quincy, as the young man set off  to Russia in 1781.  "Johnny" was just fourteen-years-old, but fluent in French, proficient in Greek and Latin, and precocious enough to be commissioned official secretary to the American minister to Russia on that trip.  If pedagogical practice of the period was any measure, young John Quincy Adams probably had a lot more poems in his head than in his pocket.  Poetry memorization was an important part of any young child's education.

On the Core Virtues site, we're featuring classic poems that sing to the heart and celebrate the virtues. If your students learn them by heart, they will be part of a long and fruitful pedagogical tradition. Literary  critic Brad Leithauser notes “memorized poems are a sort of larder, laid up against the hungers of an extended period of solitude.”  Poems committed to memory can inspire (even save us) in moments of darkness or isolation (just ask Nelson Mandela or Joseph Brodsky, a dissident in the Gulag).  The treasures of memorized verse are not limited to political exiles, though.  Poetry memorization allows students to internalize the quality language, cadence, rhyme, and rhythm that "lifts the veil from the hidden beauty of the world."  They are a source of wonder. 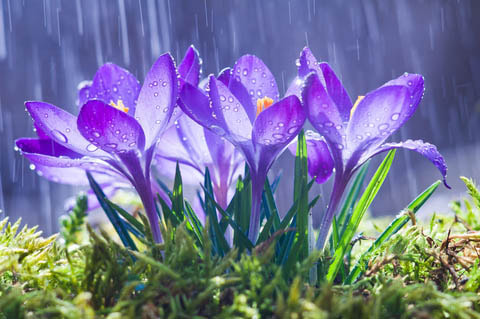 April
​​
Rain has such fun in April, it patters through the trees
Talking to all the leaf buds and robins that it sees
It splashes through the puddles and skips along the walks
Goes coasting down the grass blades and dandelion stalks
It dips in all the flowers and when the clouds blow by
It paints with flower colors a rainbow in the sky.

"Cold" from Snow in the Garden by Shirley Hughes 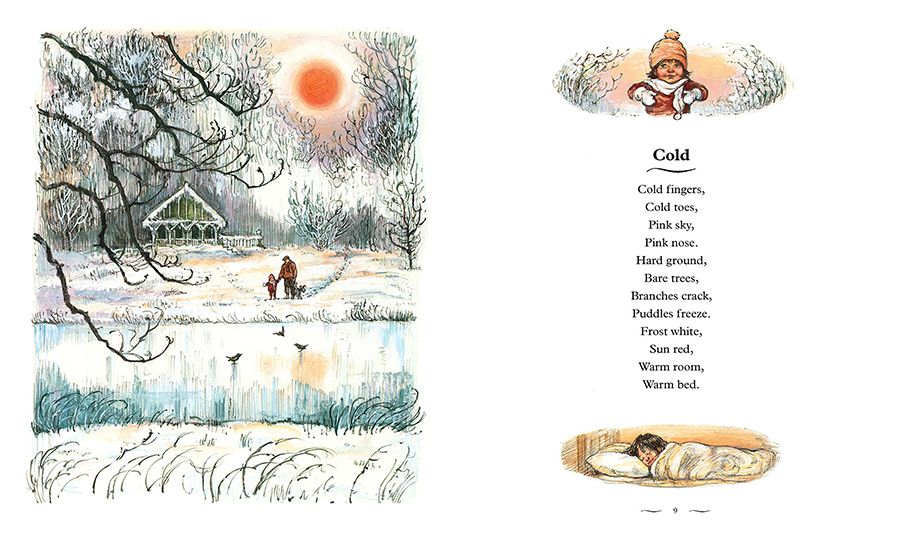 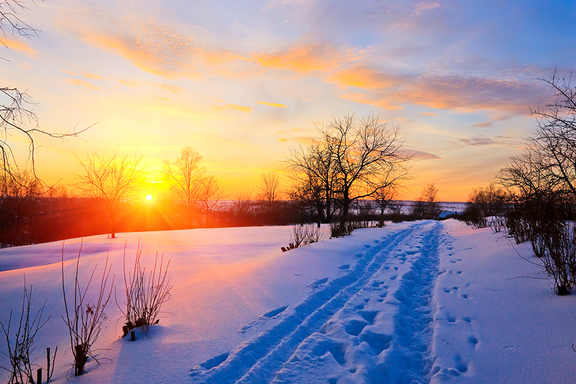 Winter-time
​
Late lies the wintry sun a-bed,
A frosty, fiery sleepy-head;
Blinks but an hour or two; and then,
A blood-red orange, sets again.

Before the stars have left the skies,
At morning in the dark I rise;
And shivering in my nakedness,
By the cold candle, bathe and dress.

Close by the jolly fire I sit
To warm my frozen bones a bit;
Or with a reindeer-sled, explore
The colder countries round the door.

When to go out, my nurse doth wrap
Me in my comforter and cap;
The cold wind burns my face, and blows
Its frosty pepper up my nose.

Black are my steps on silver sod;
Thick blows my frosty breath abroad;
And tree and house, and hill and lake,
Are frosted like a wedding-cake. 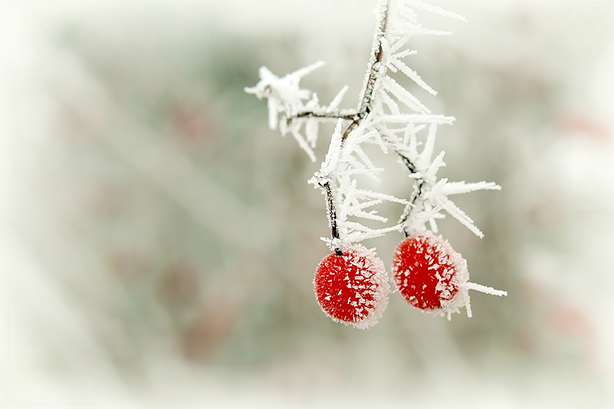 November comes and
November goes,
With the last red berries
And the first white snows.

With night coming early
and dawn coming late,
And ice in the bucket
and frost by the gate.

The fires burn
and the kettle sings,
And earth sinks to rest
Until next spring. 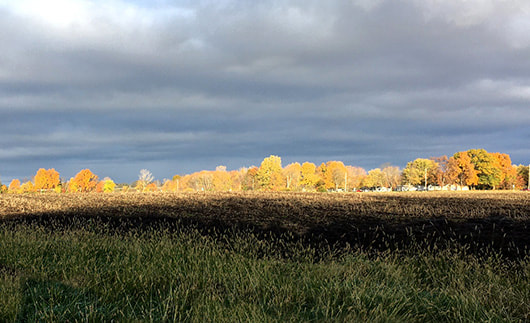 O Autumn, Autumn! O pensive light
and wistful sound!
Gold-haunted sky, green-haunted ground!
When, wan, the dead leaves flutter by
Deserted realms of butterfly!
When robins band themselves together
To seek the sound of sun-steeped weather;
And all of summer’s largesse goes
For lands of olive and the rose!

Effie Lee Newsome. 1885-1978
September
The wonder of the monarch butterfly's fall migration inspires us this September.  As we celebrate the labors of hard-working humans (on Labor Day), let us not forget the "tiny tigers" who "work as one, flutter firmly toward the sun."  Half a million butterflies undertake the annual north to south migration, winging their way over three thousand miles to respite in southwestern Mexico. 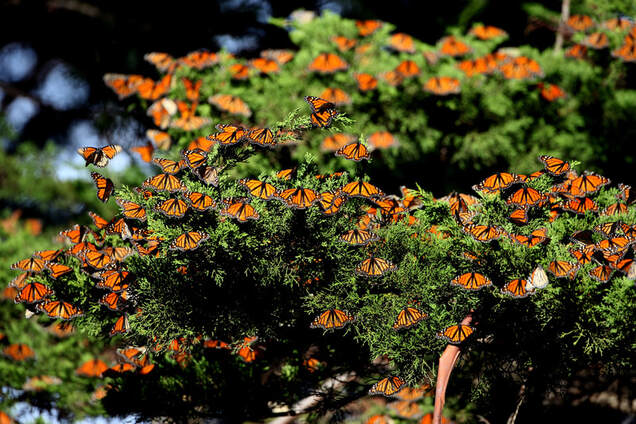 Monarchs fly to Mexico.
Millions flee from winter snow.
Wings wink quickly to and fro
as monarchs feel which way to go.

They listen to a voice inside
find a wave of wind to ride
stay together
work as one
flutter firmly toward the sun.

They know what they were born to do.
I’d like to be a monarch too.

In winter I get up at night
And dress by yellow candle-light.
In summer, quite the other way,
I have to go to bed by day.

I have to go to bed and see
The birds still hopping on the tree,
Or hear the grown-up people’s feet
Still going past me in the street.

And does it not seem hard to you,
When all the sky is clear and blue,
And I should like so much to play,
To have to go to bed by day? 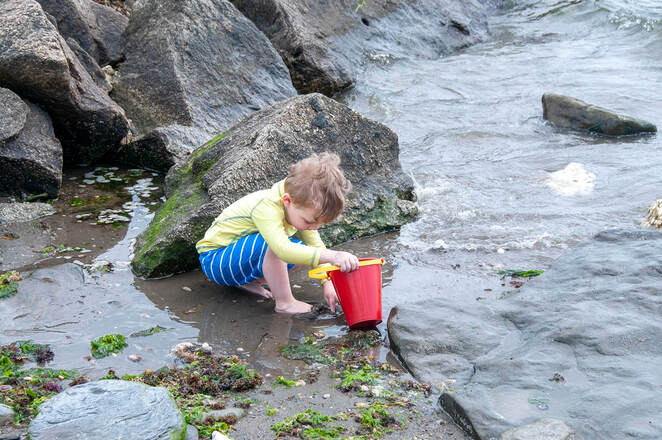 The sun is rich
And gladly pays
In golden hours,
Silver days,

And long green weeks
That never end.
School’s out. The time
Is ours to spend.

There’s Little League,
Hopscotch, the creek,
And, after supper,
Hide-and-seek. 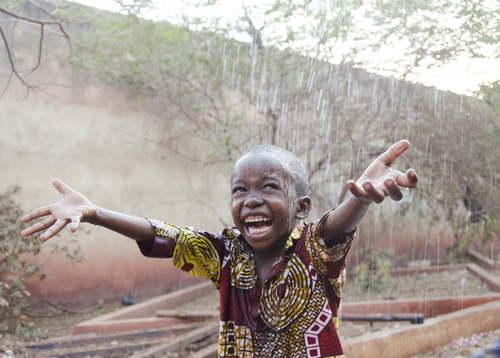 Water the wonder
that lives in your brain.

The more that you ask
the more you will know.

Wallow in wonder
wherever you go.

Daffodils blare out the news.
Birds chatter, squirrels jabber,
all ecstatic--Spring is here!
Except for the apple tree,
who wakes late, stretches, shakes herself,
makes one last drift of pale-pink snow.

From Tap Dancing on the Roof. Sijo (poems) by Linda Sue Park 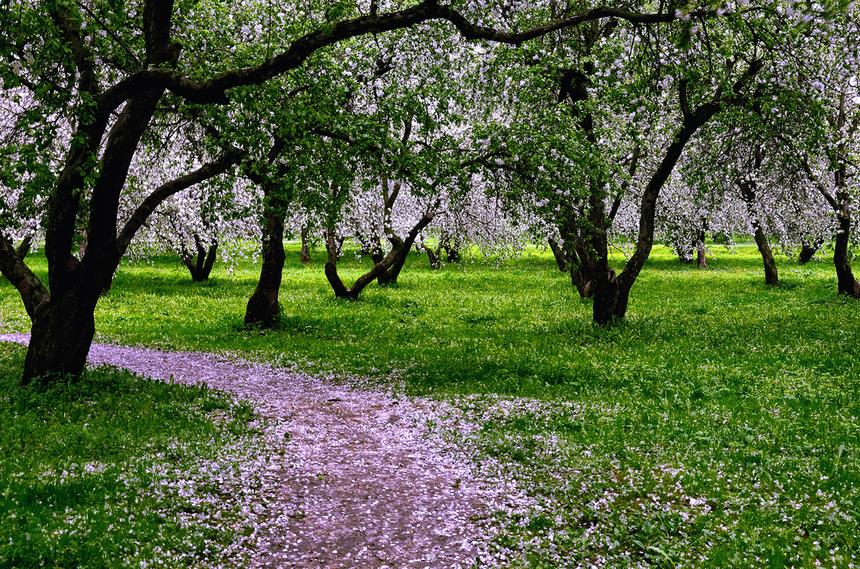 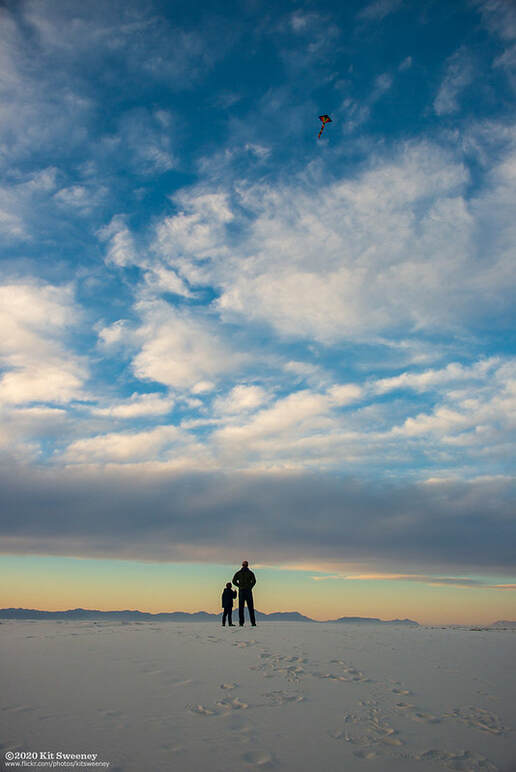 With winter's footprints in the past,
and snows begin to melt at last.

With longer days and shorter nights,
the wayward winds of March take flight.

Four winds she holds within her grip,
then hurls them from her fingertip.

Her woolly, fleecy clouds of white,
she sets in skies of blue delight.

Her wild bouts of gusty breezes
roar through valleys, hills, and trees.

She tears a hole in heaven's sky
so sun can shine and rain can cry.

She gently calms as spring draws near,
as blooming daffodils appear.

She welcomes April showers in,
then gathers up her dwindling winds.
Now her long journey home begins,

knowing she'll be back this way,
upon a cold, late winter's day,

Listen for her whistling song! 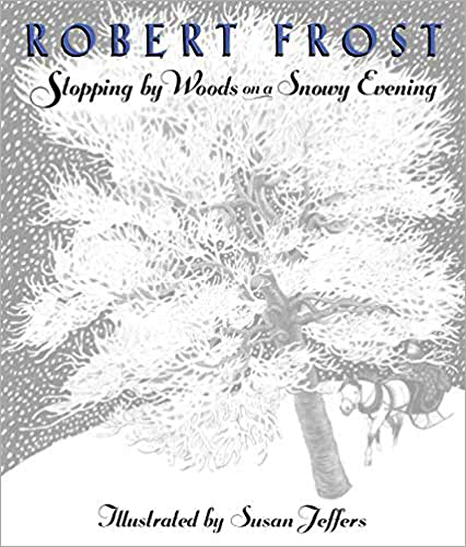 Stopping by Woods on a Snowy Evening

Whose woods these are I think I know.
His house is in the village though;
He will not see me stopping here
To watch his woods fill up with snow.

My little horse must think it queer
To stop without a farmhouse near
Between the woods and frozen lake
The darkest evening of the year.

He gives his harness bells a shake
To ask if there is some mistake.
The only other sound’s the sweep
Of easy wind and downy flake.

Adam Lindsay Gordon
December
With these poems, we celebrate "the reason for the season"!
November 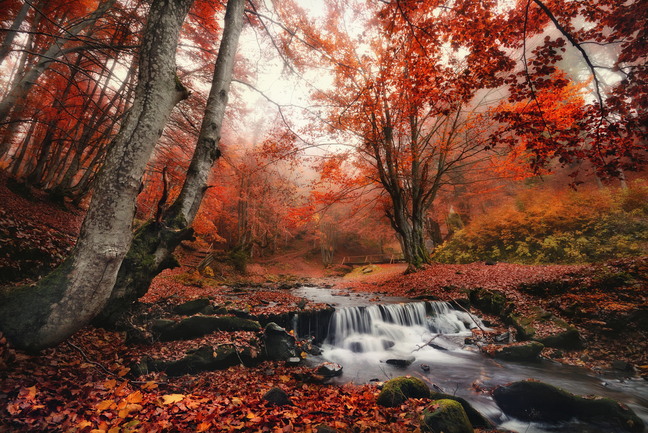 Now it is November,
Trees are nearly bare;
Red and gold and brown leaves
Scatter everywhere.

Dark now are the mornings
Cold and frosty too;
Damp and misty evenings
Chill us through and through.

Busy are all creatures,
Winter food to hide;
Nests to make all cozy
Warm and safe inside. 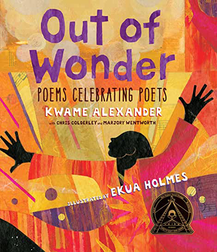 "Poems come out of wonder, not out of knowing." Lucille Clifton.

This quote was the inspiration for Out of Wonder. Poems Celebrating Poets by Kwame Alexander. This month delight in the richness of these poems written by Alexander, Chris Colderley and Marjory Wentworth as they emulate the style of 20 of Kwame's favorite poets. Exuberantly illustrated by Ekua Holmes.
October
Self-Control
by Edgar Guest

When I have lost my temper
I have lost my reason too.
I’m never proud of anything
Which angrily I do.
When I have talked in anger,
And my cheeks are flaming red,
I have always uttered something
Which I wish I had not said.
In anger I have never
Done a kindly deed or wise,
But many things for which I felt
I should apologize.
In looking back across my life,
And all I’ve lost or made,
I can’t recall a single time
When fury ever paid.

For parents and teachers who are interested in learning more about the value of memorizing poetry please check out these articles: Memorize That Poem! by Molly Worthen and Why We Should Memorize by Brad Leithauser

Lend a Hand: Poems About Giving. John Frank. Illustrated by London Ladd. Lee and Low Books, 2019. (3-5) Compassion, Generosity
In fourteen original poems children encounter other young people offering random acts of kindness.  These range from singing at a retirement home to picking up litter to training a service dog to sharing a sandwich with a hungry classmate, and more.  Gorgeous illustrations.    ​
Sing A Song of Seasons: A Nature Poem for Each Day of the Year.
Fiona Waters, editor, Illustrated by Frann Preston-Gannon.
​Nosy Crow, 2018, (K-6) Wonder
This gorgeous, hefty volume is a great way for teachers and parents to infuse poetry into everyday life. Fun and lively illustrations are the backdrop for relatively short, seasonally appropriate poems for every day of the year. (Great for memorizing.) Old favorites, new poems, serious and silly: each inspires wonder and delight at the beauty of nature.  A poetry anthology, rather than a Morning Gathering read-aloud, and a treasure for the classroom or for family to share.
The 20th Century Children’s Poetry Treasury. Edited by Jack Prelutsky.
Illustrated by Meilo So (K-6)
Jack Prelutsky has collected rollicking, fun poems of contemporary poets  – not sugary sweet or moralistic poems of bygone days, but poems about the  feelings of real kids growing up today. Lovely and whimsical watercolors illustrate the 211 contemporary poems.

A Child's Book of Poems. Illustrated by Gyo Fujikawa. Sterling, 2007 (K-2)
Classic children's poems with delightful illustrations. It is unchanged from the original 1970's version you may remember from your childhood.

A Whiff of Pine, A Hint of Skunk. Deborah Ruddell. Illustrated by Joan Rankin. Margaret McElderry Books, 2009. (K-3) Poetry, Wonder
A delightful collection of poems about nature. Consider "Biography of a Beaver" -  Bucktooth Cleaver, Tree Retriever, Building Conceiver, True Believer, Waterproof Weaver, Overachiever, Roll-Up-Her-Sleever – Hooray for the Beaver!  Lighthearted illustrations of the woodland scenes along with the poems make you want to take a walk in the woods.

Read! Read! Read!  Amy Ludwig VanDerwater.  Illustrated by Ryan O’Rourke.
Wordsong, 2017 (K-4)
Twenty three poems about reading by contemporary poet VanDerwater.  Each one simply but eloquently reiterating how and why reading is so important in our lives.  A lovely collection that can be read again and again.

Poetry for Young People. Sterling Children’s Books (3-6)
A wonderful series of individual books on great poets of the English language:  Emily Dickinson, Robert Frost, Langston Hughes, William Shakespeare, Walt Whitman, and more. The volumes feature a picture of the poet, several pages of biography, reflections on what may have influenced their poetic style and content, and a selection of poems.  Each poem is fittingly illustrated and accompanied by definitions for words that may be unknown to children. The illustrators have been chosen to complement the style of the poetry. ​

Mirror Mirror. A Book of Reverso Poems. Marilyn Singer. Illustrated by Josee Masse.
Dutton Children’s Books, 2010 (1-4)
Each poem in this unique collection can be read top to bottom or bottom to top. Charmingly illustrated, each page is split in half with each side matching the up or down poem. This new take on old fairy tales is fun and thoughtful.