Approximately 3.5 million American Muslims will celebrate Ramadan from Thursday, April 23 to Saturday, May 23.  The observance is from one crescent moon to the next, and constitutes one of the Five Pillars of Islam.  Muslims fast from sun rise to sunset, so a pre-dawn breakfast and a night time repast constitute their only meals.  The custom of fasting in this period is accompanied by works of charity and prayer.  This is a time when, by cultivating bodily purity, the faithful attempt to grow closer to God.

Public and independent schools have no obligation to teach about Ramadan, but some explanation is helpful with an increasing number of Muslim students, who are fasting during the school day. Understanding the feast is part of cultural literacy. Core Knowledge schools introduce Islam in first and fourth grade (children learn about its Five Pillars in fourth).  Teachers who wish to teach about Ramadan in non-Muslim school settings could simply preface readings by saying:  "Here's what Muslims around the world are celebrating this month.  This is the background that gives meaning to their celebrations."  When the books are narrated from the standpoint of a believer, simply say so.

​We offer a variety of books, some of which will be more suited to Schools of Faith than public schools, but teachers will be the best judges. This is a work in progress.  We will be adding more books as they come to our attention:  feel free to submit recommendations! 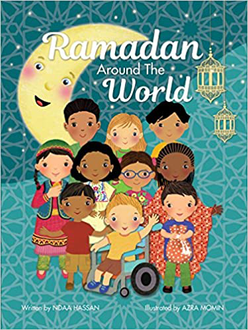 Ramadan Around the World. Ndaa Hassan.  Illustrated by Minha Kauser. Hassan, 2018. (K-2)
From one sighting of the crescent moon to the next, Ramadan lasts 30 days, and in this lovely picture book the reader joins the moon as it looks down on families around the world celebrating the Muslim month of fasting, prayer, charity, and community.  This is not a preachy book.  Instead, it spotlights the range and diversity of the Muslim community worldwide (from the US to Senegal, from Turkey to Scotland, Egypt to Australia), diverse traditions during the month of fasting, and acts of charity encouraged.  Very poignant inclusion of autistic children, hearing-impaired, wheel-chair bound, and from folks all different backgrounds.  A good introduction to Ramadan for those who know little about it. 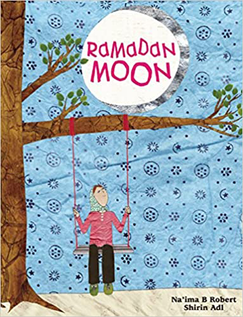 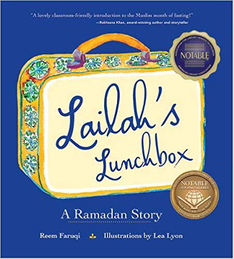 Lailah's Lunchbox: A Ramadan Story.* Reem Faruqi. Illustrated by Lea Lyon. Tilbury House, 2015. (1-5)  Courage, Respect, Faith
Lailah's family has moved from Abu Dhabi (United Arab Emirates) to Atlanta, and the ten-year-old girl won't be bringing her lunchbox to school during the feast of Ramadan, when devout Muslims fast. Lailah is excited to fast because it means she's growing up, but anxious about how to explain the custom to her teachers and classmates, who assume she's just forgotten her lunch. What will they think of her? After agonizing in silence in the cafeteria, she slips off to the library, where she confides in the school librarian, and they formulate a plan. Lailah writes a very well received poem of explanation to her teacher and friends. A little girl has the courage of her convictions, and her classmates come to understand and respect a different tradition. The lesson has potential applicability for all children agonizing over customs that make them or their families different.  Beautiful watercolor illustrations.  The content makes this a 1-5 option.*Available on Epic! 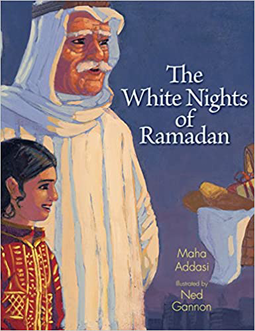 The White Nights of Ramadan. Maha Addasi.  Illustrated by Ned Gannon. Boyd Mills Press, 2017.   (2-4)
The story of a Middle Eastern family celebrating "Girgian," the three day period in Ramadan when children dress in traditional garb, and go house to house to collect candy -- which the families have made.  The story invites readers to learn about another culture and a unique holiday.   Noor, the little girl we follow, remembers to share with those in need, as well as make candy!  Stunning illustrations suffused with light capture the reader's attention.
Core Virtues Foundation Copyright © 2018