Thanksgiving is the quintessential American holiday.  Celebrated in some form from colonial times to the 1860s, Sarah Buell Hale and Abraham Lincoln were responsible for establishing the fourth Thursday in November as national holiday and an annual day of thanksgiving for our nation's bounty and blessings.  Hale (see our two picture book biographies below) waged a decades-long campaign for the establishment of Thanksgiving as a national holiday before she found the receptive ear of Abraham Lincoln.  Lincoln, in the midst of the bloody Civil War, understood that when Americans take time to focus with gratitude on what they've been given and how they've been blessed, they honor the font of blessings and can unite in fellowship.

Our Thanksgiving selections below range from those that explain the historic "First Thanksgiving" (Plymouth 1621) to its establishment as a holiday to those that embody modern stories of gratitude for the blessings of liberty and bounty.  The original Thanksgiving of 1621 (Pilgrims celebrate a bountiful harvest in fellowship with Native Americans who helped them plant their crops) should remain an inspiration for the young. The three-day celebration of those who were not always friends was indeed a time of setting aside differences and coming together in good will.

Thanksgiving is a great time to read as a family! Here are a few of our favorite Thanksgiving books, new to the site for this season: 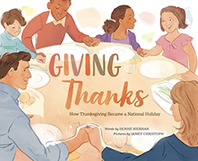 Giving Thanks: How Thanksgiving Became a National Holiday. Denise Kiernan. Illustrated by Jamey Christoph. Philomel Books 2022. (K-3)
A young child's introduction to the theme of gratitude and the feisty, can-do woman who brought it home as a national holiday for the U.S.A. 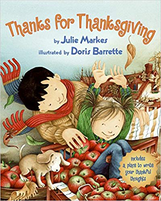 Thanks for Thanksgiving. Julie Markes.  Illustrated by Doris Barrette. Harper Collins, 2004. (Pre-K-1)  Gratitude
For the very  young, this is a charming, vividly illustrated picture book, in which a brother and sister count their blessings.  The text is modest, but sweetly rhyming. “Thanks for Thanksgiving, for turkey and pie. Thank you for fall and gold leaves floating by… Thanks for umbrellas, for rain boots and puddles. Thank you for Mommy and warm, cozy cuddles.”  The text will encourage young children to reflect on what they're thankful for, and maybe even rhyme their blessings.  ​ 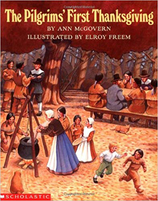 The Pilgrim’s First Thanksgiving. Ann McGovern.
Illustrated by Elroy Freem. Scholastic, 1993. (K-3) Gratitude
In print for twenty-five years, this little volume recounts the story of the Pilgrims with verve and sympathy.  McGovern’s language is concrete and evocative:  “The Mayflower was as big as two trucks.” She recounts the difficulty of the voyage, the hardship of the first winter in Plymouth, the community’s quest to build homes and establish gardens, and the Native Americans, who helped them (with special focus on Squanto, of course).  Beautiful illustrations by Freem are reminiscent of N.C. Wyeth. 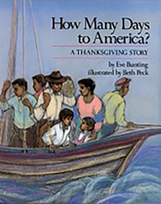 ​How Many Days to America?  A Thanksgiving Story. Eve Bunting
Illustrated by Beth Peck.  Sandpiper, 1990.  (K-3) Gratitude
Seeking the blessings of liberty, eager immigrants from an unnamed Caribbean nation set sail on a perilous journey to the United States. They face heavy seas, a leaky vessel, thieves, sickness and hunger, but land in their new home on Thanksgiving Day, and find they have much to be thankful for indeed.  Eve Bunting’s touching account is a classic immigrant story and resonates with all whose ancestors left a familiar world in search of a better life. Still in print after twenty years! 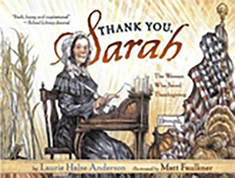 Thank You, Sarah:  The Woman Who Saved Thanksgiving
​Laurie Halse Anderson.  Illustrated by Matt Faulkner.
Simon and Schuster, 2005. (K-3)
The bouncy “superheroine” approach in this picture book tends to portray Sarah Hale as a caricature of herself (she becomes a bit of a stubborn, willful, quill-wielding nag.) But young children will at least meet this noteworthy woman, and learn of her wide-ranging efforts. See also Sarah Gives Thanks. 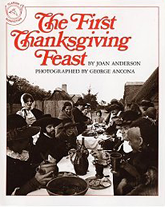 The First Thanksgiving Feast. Joan Anderson
Photographed by George Ancona. Clarion, 1989. (1-3)Gratitude
Told in the first person by various “interpreters” (actors who recreate the lives of pilgrims) at Plymouth Plantation, this is the story of the First Thanksgiving. With photographs from historic Plymouth Plantation and text resonant of the times, we learn the story of the pilgrim’s first year and experience their gratitude, not just for their harvest, but for the grace of God in preserving them in this new land. The three-day celebration with the Wampanoag is beautifully captured. 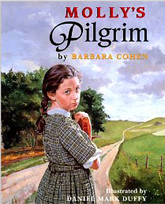 Molly’s Pilgrim. Barbara Cohen.
Illustrated by Daniel Mark Duffy. Harper Collins, 1998. (2-4)
​Molly is a third grader, whose Jewish family has emigrated to the United States from Russia.  She experiences the taunting of classmates, who tease her about her accent, the size of her eyes, and the shape of her nose.  Then one day Molly is given a Thanksgiving assignment to make a pilgrim doll for a school diorama.  The children are reminded that the Pilgrims left England for the freedom to practice their religion (just like Molly’s family).  The doll Molly brings to class might be a source of more laughter and scorn, but classmates learn that “it takes all kinds of pilgrims to make Thanksgiving.” And Molly learns she has a lot to be thankful for.  This is a heart-wrenching story: the pathos and taunting may make it too heavy for K-1, but second to fourth graders will deeply appreciate it. 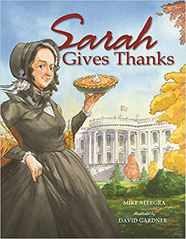 Sarah Gives Thanks. Mike Allegra.  Illustrated by David Gardner. Albert Whitman & Co., 2012. 2-6.
This rich picture book biography chronicles the remarkable life of the young widow Sarah Josepha Hale, who found herself supporting five children on the death of her husband.  Her enterprise as a writer and editor in mid-nineteenth century America are much on display, but Allegra chronicles in lovely fashion her campaign to make Thanksgiving a national holiday. Hale's focus in her writing and as an editor was on promoting gratitude for blessings, and Thanksgiving as a way to do this. (Modern psychologists would approve.)  This is a more serious book than Thank You, Sarah  and a story children deserve to know. 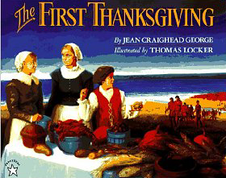 The First Thanksgiving. Jean Craighead George
Illustrated by Thomas Locker. Puffin, 2001. (2-5)Gratitude
Quintessentially capable story teller, Jean Craighead George, brings her gift to this substantial retelling of the First Thanksgiving.  She begins her lyrical narrative with the formation of Plymouth Rock at the end of the last Ice Age, describes the settlement of the Pawtuxet tribe thousands of years later, that tribe’s first encounter with Englishmen, the 1620 settlement and sufferings of the Mayflower pilgrims, their efforts and perseverance to survive and ultimately secure a good harvest.  It is a book that inspires admiration for the efforts of the many peoples who have called Plymouth home, gratitude for blessings given, and respect/stewardship for the gifts of nature.  Stunning illustrations by Locker accompany substantial text. 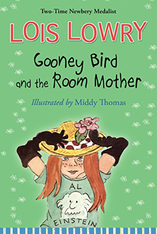 Gooney Bird and the Room Mother. Lois Lowry. Illustrated by Middy Thomas. Houghton Mifflin, 2005. 75 pgs. (2-4) Thanksgiving, Friendship
Second grader Gooney Bird Greene likes to be smack in the middle of everything. With her irrepressible enthusiasm for fashion, storytelling and vocabulary, she keeps the second grade on their toes. ("Get out your dictionaries, class.") The second grade is participating in the school Thanksgiving pageant and Gooney Bird is desperate to land the role of Squanto. That honor will go to the person who finds a room mother for the second grade. When her own mother is too busy, Gooney Bird gets resourceful. Delightful and funny with a touching ending, this story is a winner. 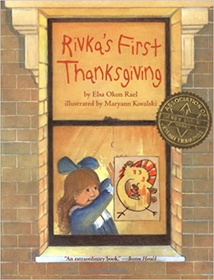 Rivka's First Thanksgiving. Elsa Okon Rael.  Illustrated by Maryann Kovalski.
Margaret McElderry, 2001. (3-6)
Set on the Lower East Side of New York in the 1910s, this is the story of a Jewish immigrant child who wants her newly arrived family to celebrate Thanksgiving.  Nine-year-old Rivka has learned all about the national holiday in school, but her mother and grandmother believe that as Jews, Thanksgiving probably isn't for them.  ("it sounds like a gentile party.") Rivka must convince the Rabbi (and six of his peers) that they share something with the Pilgrims of long ago, who also sought to avoid religious persecution, and were aided by people who befriended them in their new land.  Children learn about pogroms that threatened Jews in Europe and drove many to U.S. shores. A heartwarming affirmation of Thanksgiving as a national holiday of gratitude for freedom and blessings bestowed, and one that has united Americans past and present.  The text (which is explains European persecution and pogroms and violence endured) make this an older child's picture books.  The illustrations are a tad cartoonish and sometimes fight with the book's message. 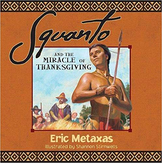 Squanto and the Miracle of Thanksgiving.  Eric Metaxas. Illustrated by Shannon Stirnwels.  Nelson,2012. (3-6)
A fascinating angle on the first Thanksgiving.  In 1608, Tisquantum or “Squanto,” a Patuxet brave was abducted from his seaside village by European merchants and sold into slavery in Spain.  His new masters were Spanish monks, who taught him their language and sympathized with his plight.  More than a decade later, they arranged for his passage home to North America via London. There Squanto learned to speak English, and was treated well by the English.  When he returned to his Massachusetts home, he found his village had been decimated by small pox, and a new colony of English living there.  He felt called to help them.  This is a rich narrative that tells the story of the first Thanksgiving through an unusual and very appropriate lens.
Core Virtues Foundation Copyright © 2018