Heroes - Lives to Learn From
​
September

In September we remind children that "responsibility is doing our part for the groups that make us whole." Classroom responsibilities range from simple housekeeping chores to facilitate learning to consistently doing one's homework.  Seldom is one's "responsibility" raised to the level of heroism.  But there are men and women, our nation's first responders, who, as part of their jobs and vocations, risk their lives for others.  And that is heroism.

In September 2019, we feature not a single hero, but, in honor of September 11th, exemplars of heroic responsibility in action.  New York's Bravest looks back to nineteenth-century hero, Mose Humphrey, and the founding of New York firefighters.  Our other choices speak specifically to September 11, 2001, the largest terrorist attack in U.S. history, and one that killed nearly 4000 people.  That day we saw heroic responsibility in action as many risked their lives to save others.  The sight of the firefighters, police, and medical teams running towards danger, while half a million others were fleeing, is one that lives in our hearts and memories, and worth passing on to our children. So too is the true story of the Maasai tribe in Kenya that sought to comfort their American brethren. 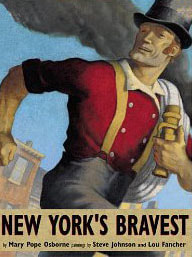 ﻿New York’s Bravest ﻿   Mary Pope Osborne
Dragonfly Books, 2006. (K-3)
This tall tale of Mose Humphrey, a legendary nineteenth century New York firefighter, is dedicated to the memory of the 343 firefighters who lost their lives in rescue efforts on that day.  While squarely in the tradition of tall tales, Osborne’s retelling invokes the heroism and courage of those who actually run into harm’s way, while others are fleeing from it.  A fitting tribute to those who lost their lives helping the victims of that tragedy. 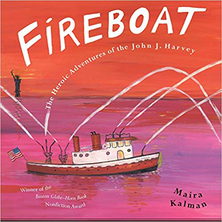 Fireboat. The Heroic Adventures of the John J. Harvey. Maira Kalman. G.P. Putnam's Sons, 2002.  (K-2) Heroism, Stewardship.
Very much in the spirit of Mike Mulligan and His Steam Shovel, this is the true story of a fire boat (a boat built to pump water and fight fires on piers) built in 1930, just as the Empire State Building was rising. She was sent to the scrap heap in 1995, the little vessel was reclaimed by friends (investors), who couldn't bear to let her go, and brought her back to life.  It's a good thing, because on September 11, 2001, every waterline and water boat in New York City was needed to put out fires in Manhattan. "The nice old boat [who] could NEVER be used to fight a fire" again, everyone said, went back into service doing exactly that.  This is a helpful, sideways glance into 9-11 for young children.  The focus is less on the horrific attack, than on a brave little vessel that helped to make the city whole again, and on the people who cared for her so well. 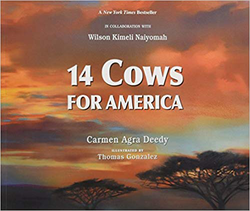 ​14 Cows for America. Carmen Agra Deedy.
​Illustrated by Thomas Gonzalez.  In Collaboration with Wilson Kimeli Naiyomah. Peachtree, 2009. (3-6)
The true story of a Maasai warrior tribe in Kenya responding to the horror of 9-11.  Kimeli, a Maasai, was studying in New York City at the time of the attack. He returns to Kenya and speaks with his people of the horror and his own wish to ease American suffering by making an offering. "To heal a sorrowing heart, give something that is dear to your own," is the Masai wisdom.  "The cow is life."  The Masai invite the American ambassador from Nairobi to accept their sacrificial gift of 14 cows to be held in a specially protected herd. Extraordinary art brings the well told story and the Maasai people to life.  The verbiage is simple but the concept (of a sacrificial offering) is profound, and for that reason we indicate older students as the audience.  (Teachers should pre-read the afterword to understand the full context.  A special flag commemorating the gift is on display at the 9-11 Memorial in New York.)  This is a touching example of a distant people feeling kinship and responsibility toward the wounded. "Because there is no nation so powerful it cannot be wounded, nor a people so small they cannot offer mighty comfort." 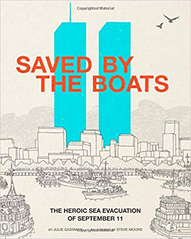 Saved by the Boats: The Heroic Sea Evacuation of September 11.
Julie Gassman. Illustrated by Steve Moors. Capstone Press, 2017.
Heroism, Solidarity.  (3-6)
Stark gray, white, and blue illustrations give life to the true story of America's own Dunkirk.  When the Towers fell on September 11, half a million people had to flee Manhattan, and the Coast Guard called on every boat available to get city-dwellers and survivors of the attacks to safety.  This is the dramatic retelling of that harrowing day from one who waited for the sea captains to save her. It is a story of unexpected heroism and America at its finest. 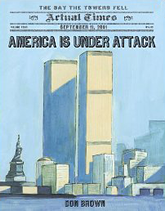 America Is Under Attack    Don Brown
Flash Point, 2011.  (4-6)
This is an honest, sober, and gripping account of September 11 by children’s author Don Brown, who has written on topics ranging from the sinking of the Titanic to Neil Armstrong’s landing on the moon.  At 48 pages with evocative water color illustrations, it is a succinct and compelling overview for fourth to sixth graders. 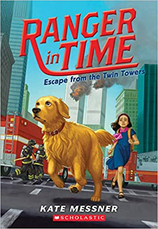 Ranger in Time. Escape from the Twin Towers. Kate Messner. Illustrated by Kelly McMorris. Scholastic Press, 2020. Chapter book.   144 pages.  (4-6)
Ranger, a time-traveling rescue dog, is called to New York City on the morning of September 11, to help two children and their mother flee from the flaming towers.  Kate Messner deftly and respectfully portrays the tragic event, the heart-stopping escape of the lucky, and also shines a light on those who came to save (not just rescue dogs).  This is a very age-appropriate way to introduce fourth to sixth graders to the horror of 9-11.  (And kids will fall in love with Ranger, who has other adventures in other books.) The book could be read aloud over the course of a week around September 11. 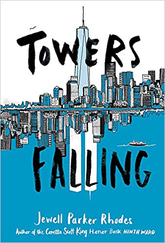 Towers Falling. Jewell Parker Rhodes. Little, Brown & Co. 2016. (4-6) Chapter Book, 228 pgs  September Heroes, Friendship
Fifth grader Deja has to start at a new school in Brooklyn when her family moves to a homeless shelter. Life at home is not easy for Deja. Her father is ill with respiratory problems, complicated by PTSD. Deja is also responsible for her younger siblings.  She is befriended by Ben and Sabeen, who help her adjust to the new class. When they begin to discuss the events of September 11th, Deja is confused. She has no idea what happened on that day. Ben helps her to understand the events and Deja begins to realize the connection between that and her Dad’s problems. When she confronts her Dad, he admits he tried to keep it from her because it was so terrible. However, talking with her about it helps him to grieve and let go of his guilt for not being able to help his friends that day. 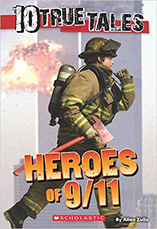 Heroes of 9/11.  Ten True Tales. Alan Zullo. Scholastic, 2011. (5-6)
Any one of these 15-20 page stories could be read at circle to Middle Schoolers (this is not a picture book). These are, as the title indicates, true stories of police, firefighters, paramedics, port authority workers, and victims who put others before themselves in the horrific chaos of 9-11. For example, "We Can't Abandon Her!" tells of the FDNY team that assisted a heavy-set elderly woman (Josephine), who'd used all her energy to get from the 70th to 20th floor of the North Tower, but could go no further.  Getting her of the building before the tower's inevitable collapse slowed the team's pace and threatened their escape, but in the end, kept them from being killed in the collapse of the tower.  Inspiring and harrowing tales. 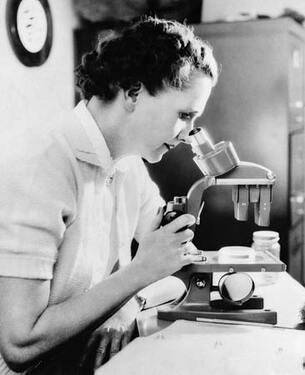 In September, when students begin their studies, they are often torn between “back to school” excitement and the lure of fading summer joys.   What better heroine for September than that chronicler of the sea, Rachel Carson!
​
Rachel Carson 1907-1964
Carson’s childhood love of the sea and all of nature led her to a fruitful career in marine biology and gave our country a poetic and prolific writer on natural history.   Her three volumes Under the Sea Wind (1941), The Sea Around Us (1950), and At the Edge of the Sea (1953) were histories of the ocean and its sea life.  Her lifelong interest in preserving natural wonders made her one of the first environmentalists. In the 1960s, she began to write on the dangers of new chemical pesticides (DDT) being sprayed without regard to the delicate ecosystems they damaged. Her most famous book, Silent Spring, published in 1962 helped launch the environmental movement, and is widely regarded as one of the best volumes of non-fiction published in the twentieth century. Discover Magazine named Silent Spring one of the 25 greatest science books of all time. Carson’s work educates, instills a sense of wonder, and actually led to banning of DDT as pesticide.
In September, as Core Virtues schools focus on “respect and responsibility,” we hope you’ll celebrate this woman who throughout her career exemplified respect for our natural world and care in its stewardship.
Core Virtues Foundation Copyright © 2018