Veteran's Day and Memorial Day
The books recommended below can be used for either of these two important holidays.
​On November 11 we honor those who have served in our Armed Forces. November 11 is the date for this commemoration because on the eleventh day of the eleventh month of the eleventh hour in 1918, the warring world signed an armistice, ending the slaughter of millions in World War I.
For years known as "Armistice Day," the holiday is now a broader tribute to veterans of our Armed Forces.  On the last Monday of May we celebrate Memorial Day, which honors members of the armed forces, who gave their lives in service to our country. 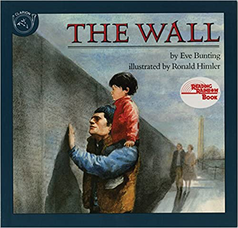 The Wall.  Eve Bunting.
Illustrated by Ronald Himler. Clarion Books, 1992. (K-3)
Veterans Day, Memorial Day, Heroism
In this haunting book, a young boy, the grandson of a fallen Vietnam War veteran and his dad travel to Washington,D.C. to visit the Vietnam Memorial and find the grandfather’s name. They scan the names under 1967, seeking and recalling.  They leave a photo of the grandchild he never knew, and see what others have left there.   They encounter other visitors, among them a wheel-chair bound and decorated vet, who too seeks his solace there.  Without being preachy the book recalls the sacrifice of those who served. and the 58,000 who died. Beautiful, sometimes stark, watercolors accompany the somber walk in this solemn place on a fall day. 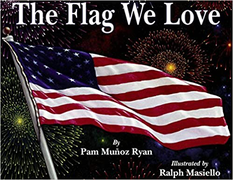 The Flag We Love. Pam Munoz Ryan. Illustrated by Ralph Maiello. Charlesbridge, 2000. (1-3) Veterans Day, Memorial Day, Loyalty, Love of Country
In rhyming verse, with vivid illustrations, we learn the history and special meaning of the American flag. The vocabulary will stretch Kindergartners, but is a delightful read for lower grades. 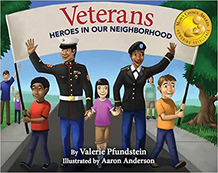 Veterans. Heroes in our Neighborhood. Valerie Pfundstein. Illustrated by Aaron Anderson. Pfun-omenal Stories, 2013.  (K-4) Veterans Day, Memorial Day, Heroes
Children learn that people they meet every day have served and sacrificed for our country. A class is asked by their teacher to name veterans they know. A boy asks his Dad, who relates that the barber and butcher, nurse and the firefighter have all served in different services. Lovely verse. The end notes have pictures of the profiled people in their uniforms and a summary of their service and occupations now. 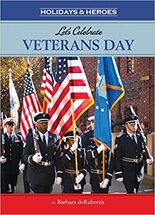 Let’s Celebrate Veteran’s Day. Barbara deRubertis. Astra Publishing House, 2014. (1-4) Veteran’s Day.
This factual overview of all branches of the armed services explains their contributions, how they help to defend our country. Illustrated with both historic and current photographs with a brief history of the national holiday. 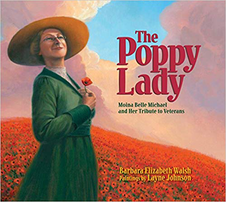 The Poppy Lady.  Moina Belle Michael and Her Tribute to Veterans.
​Barbara E. Walsh. Illustrated by Layne Johnson. Calkins Creek, 2012.
​(2-5) Love of Country, Sacrifice
American University Professor Moina Belle Michael saw her students and friends go off to fight in World War I, and many lost their lives. Inspired by the poem “In Flanders Fields,” she launched a campaign to make poppies the symbol of remembrance for fallen soldiers, who had sacrificed all for their country.  Much of Michael’s own life at this time was devoted to helping soldiers.  Warm and vibrant illustrations show women on the home front as well as departing soldiers. Excellent for Veteran’s Day or Memorial Day. 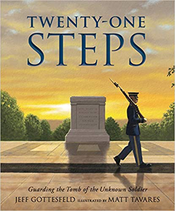 Twenty-one Steps. Guarding the Tomb of the Unknown Soldier. Jeff Gottesfeld. Illustrated by Matt Tavares. Candlewick, 2021. (2-5) Veterans Day, Memorial Day
With precision, respect, and reverence for sacrifice, Marines stand watch day and night at the tomb of the Unknown Soldier.  They pay honor and tribute to the fallen.  Perhaps inspired by Tom Cotton's full length book on this topic last spring (Sacred Duty), Gottesfeld and Tavares have brought this duty to life for children.  An excellent second to fifth grade read. 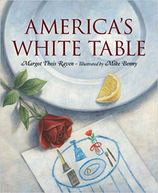 America's White Table.* Margot Theis Raven. Illustrated by Mike Benny.
​Sleeping Bear Press, 2014. (4-6)  Love of Country, Honor
A touching account of a post-Vietnam tradition observed on Veterans Day on military bases and by many military families.  Setting the small  "White Table" on Veteran's Day is a way to honor those who are missing in action or still imprisoned. "It was just a little white table... but it felt as big as America when we helped Mama put each item on it." A child recounts the symbolism of a table set just for one, covered by a white cloth (symbol of purity of heart), chair tipped in to signify one who hadn't returned, plate with one slice of lemon and grains of sand (symbolizing bitter fate and tears of the families waiting), one black napkin (to signify missing), and a red rose (remembrance).  A child witnesses this on Veteran's Day when her uncle John (a Vietnam ex-POW) comes for dinner. A powerful Veteran's Day reminder of the courage and sacrifice of those who serve in the Armed Forces. *Available on Epic! 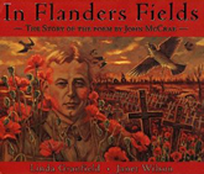 In Flanders Fields - The Story of the Poem by John McCrae
Linda Granfield. Illustrated by Janet Wilson.  Fitzhenry and Whiteside, 2014. (4-6)
This poignant volume speaks to both the sacrifice of those who fought in World War I and their hope that their death served a higher purpose. Idealistic physician John McCrae served in the Canadian armed forces on the Western Front. He experienced trench warfare, poison gas, and the death not just of many patients, but of a close friend. The death of his friend prompted him to write the famous poem which sets the stark finality of death against a background of life. He asks later generations to vindicate their sacrifice and not to break faith with those who have died. Granfield’s explanation of the war’s causes and dimensions provide a sobering backdrop for the poem, as does the knowledge that McCrae himself died before the war’s end. Teachers may wish to read the entire text of the poem with the class first, then read the contextual material over a period of two days, and conclude with a final reading of the poem. 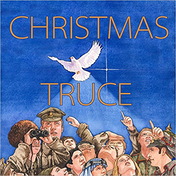 The Christmas Truce: A True Story of World War I.  Aaron Shepherd. Illustrated by Wendy Edelson. Skyhook Press, 2016. (4-6)Forgiveness
Across the trenches in France, British and German troops had been shelling each other for months.  Hatred for the enemy gripped both sides, but on Christmas Eve 1914, a most extraordinary event took place:  German troops strung lights along their posts and began to sing carols.  The English listened.  Then the Germans summoned the English to join in.  The two sides sang Christmas carols back and forth to each other, and sent well wishers of each side to meet the other.  This “Christmas Truce” has become legendary and is a heart-stopping moment of human empathy and forgiveness.  The story is told as a letter from a British soldier written to his sister back home, and though the letter is fictional, the events and its particulars are true.  The book is exquisitely illustrated by Wendy Edeleson.
Core Virtues Foundation Copyright © 2018