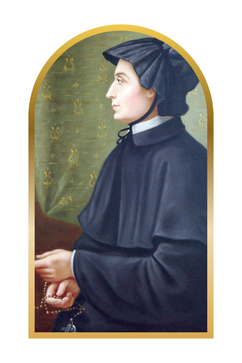 ​Elizabeth Ann Seton is an exemplar of courage, fortitude, and resilience. Imagine coming from a wealthy family, having five children, but losing your home, your husband, and all your financial resources before age 30.  And being famous for what you did later!
​
Born Elizabeth Ann Bayley to a socially prominent New York family in 1774, Elizabeth's father was surgeon who assisted immigrants arriving on New York's Staten Island; her mother (who died when she was three) and stepmother were both active in the Episcopal church's ministry to the city's poor. Elizabeth helped charter the city's "Society for the Relief of Poor Widows with Small Children" in 1797. She married merchant William Seton at age nineteen and had five children. When her husband's business went bankrupt and she was tragically widowed at age 29, her life took a different path. Her husband's battle with tuberculosis had taken them to Italy, where friends introduced her to the Catholic faith.  Elizabeth converted to Catholicism and was received into the Church in New York City in 1805 and confirmed by Archbishop John Carroll, who a few years later asked her to assist him in Baltimore.  Scorned for her conversion by many of her Manhattan friends, she picked up her family and headed to Maryland.  There she started schools for girls, the first free Catholic school, and founded the Order of the Sisters of Charity (later Daughters of Charity) to care for children of the poor. Renowned as a charming, educated, and gracious woman, she had the courage to follow her calling,  ignore the anti-Catholic sentiment of her times, leave her home and serve the Lord and her country in a new way.
Core Virtues Foundation Copyright © 2018