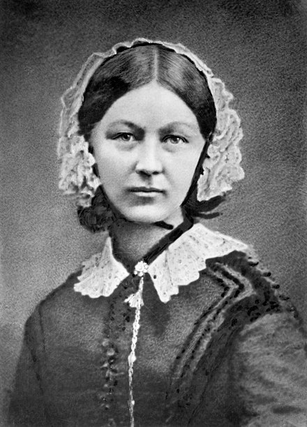 The founder of modern nursing, the "lady with the lamp" made the rounds at night among wounded soldiers in the Crimean War (1853-1856).  Hers was not simply the courage to tend the wounded in battlefield hospitals.  Florence Nightingale also forged a new profession and professional path for women -- one that her parents were none-too-happy about.   Born to a wealthy British family who expected her to marry well and bear children, she refused to be circumscribed by privilege or a desire for comfort.  Well educated, well traveled, and prayerful, she saw herself called to the service of others. She was inspired by the healing work of Lutheran deaconesses at Kaiserwerth am Rhein, a German hospital, and in 1850 decided to train with them.  By 1854, she was on the battlefield in Crimea, working industriously to improve atrocious sanitary and medical conditions for wounded soldiers.  One study credits her with reducing the mortality rate of the wounded from 42% to 2%.
​
During her long and fruitful life, Florence Nightingale ended up remaking -- or making -- the modern profession of nursing.  Not only did she serve as battlefield nurse and supervisor of many key organizations, Nightingale had mathematical gifts.  She was a prodigious analyzer of data and a prolific writer, who churned out report after report on hygiene, health, and the science of nursing.  Many of these she produced from home in bed, because she contracted "Crimean Fever" at age 38, which kept her housebound.  Nightingale was responsible for establishing the first professional school of nursing at St. Thomas Hospital in London.  She had the courage to follow a call beyond a life of privilege.

Is her life one of courage, compassion, mercy or all of the above? Read some of the wonderful works below and decide for yourself. 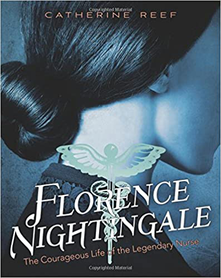 Florence Nightingale. The Courageous Life of the Legendary Nurse.  Catherine Reef. Clarion Books, 2016. 192 pgs.(6)
A rich, but easy to read, biographyloaded with pictures and illustrations of the life and times of Florence Nightingale. Called “The Lady with the Lamp” and a “ministering angel”, she devoted herself to caring for the British soldiers during the Crimean War. Always looking for a way to make life better for the sick, she had an enormous effect on the training of nurses and public regard for the field. She defied the Victorian norms and created an amazing body of work by keeping careful statistics of every aspect of health care and making this information available to hospitals and doctors worldwide. Though ill through much of her later life, Florence continued her quest for the betterment of health care until her death at age 90. 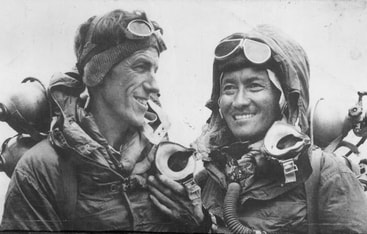 Sir Edmund Hillary (1919-2008) and
Tenzing Norgay (1914-1986)
​
Exemplars of physical courage and "the spirit of adventure," New Zealand's Edmund Hillary and Sherpa guide Tenzing Norgay were "first to the top" of Mount Everest (the world's highest peak) in 1953. Many thought the summit, which sits five and a half miles above sea level and is blanketed by air so thin human lungs do not abide there, simply could never be taken. Its vertical walls and gaping crevasses served as burial grounds for many a famed climber (George Leigh Mallory among them).  But battling howling gales and deadly icefalls, scaling sheer face of rock and ice, and braving thirty below zero temps, Hillary and Norgay summited the peak that had eluded locals, international mountaineers, and National Geographic teams for decades.  Indeed, they were part of an extraordinary National Geographic Expedition team that made the ascent possible without a single casualty.

​The news of the successful ascent on May 29, 1953 was so stunning that for a time it knocked the coronation of young Queen Elizabeth (same day) from first billing on BBC radio broadcasts!  What does it take to do the "never-before-done"?  What did a shy New Zealand beekeeper and a smiling Nepalese porter eventually have in common? In this case, rigorous training, teamwork, planning, friendship, and courage.  Hillary said the "human spirit of adventure" was for both of them a great motivator. Neither of the two mountaineers forgot to give thanks at the top:  Hillary, burying a crucifix there and Norgay (a Buddhist), biscuits and chocolate as offering to the gods.  Hillary and Norgay's friendship was life-long, and the proceeds of Hillary's book went to a foundation for development assistance in Nepal. Enkindle courage and inspire the next generation of explorers in your classes with the amazing biographies below. 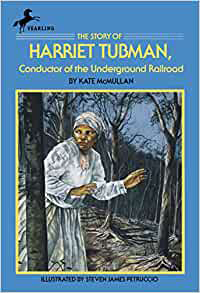 The Story of Harriet Tubman, Conductor of the Underground Railroad. Kate McMullan. Dell Yearling Biography, 1990.  (3-6)
At 110 pages, this is a well-written and inspiring read-aloud for upper grades.
Other Courageous Lives 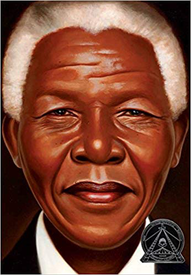 Nelson Mandela.  Kadir Nelson. Katherine Tegan Books, 2013.
​ (1-3) Courage, Love of Country, Sacrifice
Striking illustrations and modest text chart the life of South Africa's first black president.  In simple language the book chronicles Mandela's youth, education as a lawyer, active opposition to the system of apartheid (institutionalized racial discrimination), his twenty-seven-year imprisonment for resistance, and finally his release and election as president of post-apartheid South Africa. Nelson Mandela's spirit remained unbroken by his decades in jail, and his work as president focused on building a multi-racial future. Kadir Nelson does not mention Mandela's armed activism against the regime as the offense that landed him in jail, and he missed a good opportunity to speak directly to Mandela's "politics of forgiveness" after his release. The text is general and provides no strong examples of how Mandela led. Still, the illustrations are a triumph and the book does show Mandela as an exemplar of moral courage.  For other children's books on Nelson Mandela, see our April "Heroes" section. 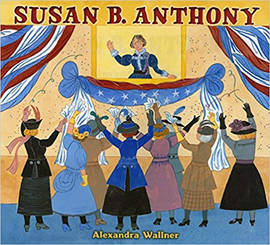 ​Susan B. Anthony. Alexandra Wallner.
Holiday House, 2012.  (2-6) Courage, Love of Country, Justice
A short, but rich introduction to one of America's bravest women.  Susan B. Anthony (b. 1820) was an early reader, and her parents believed in education for girls as well as boys.  When Susan informed her father that the local school would not teach her Mathematics (only for boys), her father, a mill owner, started a school where boys and girls would learn the same subjects.  Susan's life unfolds against that backdrop, as she challenges her father to promote mill girls over men, and goes on to challenge Americans to award the vote to women.  She wasn't afraid to stand before a crowd, speak out, and take the eggs thrown at her.  She also wasn't afraid to go to jail.  Unfortunately, she did not live to see the passage of the 19th Amendment which guaranteed women the right to vote. This short volume contains much information, intriguingly presented and with jewel-like folk art enlivening its pages.  A great read-aloud right through sixth grade. 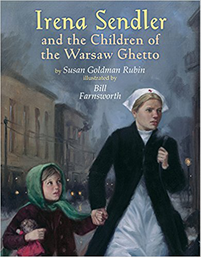 ​Irena Sendler and the Children of the Warsaw Ghetto. Susan Goldman Rubin.  Illustrated by Bill Farnsworth.  Holiday House, 2016. (4-6)Courage, Lives to Learn From
An important older child’s book about a Polish Catholic social worker, who over three years smuggled more than 2500 Jewish children out of the Warsaw Ghetto to safety during World War II.  Irena Sendler’s actions (combined with the selflessness of Jewish parents who let their children go) ensured that these children did not die in the Treblinka Concentration Camp, as most of their family members did.  Irena was eventually apprehended by the Germans for her actions, imprisoned, and tortured.  She survived but her thoughts remained with those she couldn’t save. This extraordinary story lay untold for many years, since the Communist regime that ruled Poland after the war considered her (she was anti-communist too) a traitor.  The Jewish community remembered, and Irena herself had buried the names of the children she saved in jars in her yard.   A haunting and extraordinary story of one woman, who remembered her father’s wisdom:  “When someone is drowning, you don’t ask if they can swim.  You jump in to save them.”  The large picture book format should not be mistaken for a K-3 read.  This is an older child’s book. 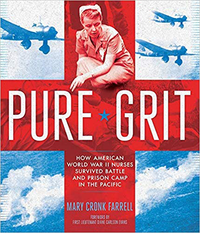 Pure Grit. How American World War II Nurses Survived Battle and Prison Camp in the Pacific.  Mary Cronk Farrell.  Abrams, 2014.  159 pages.  (5-8)  Courage, Diligence, Duty
Not a morning read-aloud, this volume is a wonderful collective biography of U.S. Army nurses captured and imprisoned in the Philippines during World War II.  These heroic women continued to serve as nurses in prisoner of war camps after their capture, and Mary Cronk Farrell chronicles in rich (but not overwhelming) detail their harrowing experience, accompanied by lots of photos.  A Junior Literary Guild Selection, this book reveals a little-known chapter in World War II history, and could be the basis for an older grade student report on the Second World War, and women in the Second World War.  One caveat:  the book has two significant errors in dates:  the headers on pages 68 and 73 indicate May and July of 1941, but the correct date for both is 1942.  (The war in the Pacific did not begin until December 1941). This unfortunate error does not negate the value of the book.
Core Virtues Foundation Copyright © 2018