On Easter billions of Christians celebrate and ponder the mysteries of faith, hope, forgiveness, and new life.  The story of Jesus' suffering in first century Rome, his crucifixion, forgiveness of his crucifiers, and most important, his resurrection on Easter Sunday are core teachings of the Christian faith and have inspired generations of artists, writers, poets, as well as believers. Over the centuries, Easter emphasis on new life and hope has given rise to the tradition of Easter eggs and yes, even the Easter bunny.

Schools without a religious affiliation (public and private) have no obligation to teach about the Easter holiday, but many schools (public and private) consider knowledge of it a staple of cultural literacy.  Core Knowledge schools cover this material (in connection with ancient Rome and World Religions) in third grade.  Teachers who teach about Easter in non-Christian schools could preface readings by saying:  "Here's what Christians around the world are celebrating this month.  This is the story that gives meaning to their celebrations.  Many great artists and writers, as well as believers, have been inspired by it." When the books are narrated from the standpoint of a believer, the teacher can simply say so.
​
We offer a variety of books, some of which will be more suited to Schools of Faith than public schools, but teachers will be the best judges. This is a work in progress.  We will be adding more books as they come to our attention:  feel free to submit recommendations! 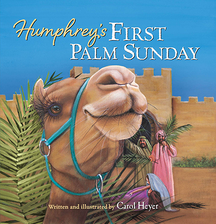 Humphrey's First Palm Sunday.  Carol Heyer. Worthy Kids, 2019 (K-2)
Humphrey, the humorous, self-absorbed camel who witnessed the birth of Jesus, is back!  Though his moment at the foot of the creche caused him to forget himself and surrender his blanket to the Christ-child, he seems to have forgotten early lessons learned.  Here (put out that he's not the lead camel in the caravan) he witnesses Jesus' triumphal entry into Jerusalem (and sees his blanket atop the donkey) and once again, is awed into humility and wonder. Lyrically and amusingly told. 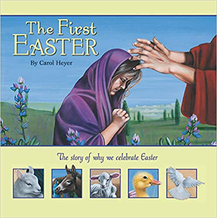 The First Easter.  Carol Heyer. Ideals Children's Books, 2000. (K-2)
This is a visually arresting book, and an excellent way to introduce children to the major stories of the Christian faith. The simply told 32 page book begins with the Christmas story, proceeds through Jesus's ministry, to Palm Sunday, temple cleansing, Last Supper, Garden of Gethsemane, trial before Pilate, crucifixion, empty tomb, and Resurrection appearance to Mary Magdalene.  It does so in ways that are moving, but not deeply disturbing to young children.  If this book is prefaced by a teacher who says to her students: "This is what Christians believe about their faith," it can be used in non-religious schools. 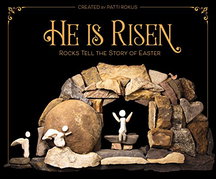 He is Risen:  Rocks Tell the Story of Easter.  Patti Rokus.
Zondervan, 2019. (K-3)
This compelling, completely unique picture book tells the story of the Resurrection in strikingly simple rock sculptures created by Patti Rockus.  A companion to her (equally splendid) Nativity story (A Savior is Born), the images draw children in, and invite them to behold the simplicity of Christ's message, sacrifice, and triumph.  Simple text tells the timeless story, but the rock images are the mesmerizing stars.  "You are my Rock and my fortress...:" positively leaps from the pages. 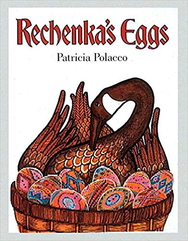 Rechenka’s Eggs. Patricia Polacco.
Putnam, 1988. (2-4)Hope
Poor Russian peasant woman aids and cares for a wounded goose, undergoes trials as result, but is richly rewarded in the end. A tale of compassion, hope, rebirth, and miracles. 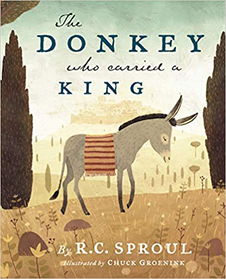 The Donkey Who Carried a King. R.C. Sproul.  Illustrated by Chuck Groenink. Reformation Trust Publishing, 2012.  2-5 (Service, Humility)
Christian schools of faith will appreciate this imaginative work of fiction. We see the passion through the eyes of the donkey who carried Jesus into Jerusalem for his triumphal entry on Palm Sunday.  Mere days later the donkey is distraught to see his "king" weighed down by a beam of wood, bearing such a burden and being abused.  Another donkey helps him see that the King is being a servant on behalf of his people.  A substantial amount of text make this a second to fifth grade book, but enlivened by beautiful illustrations.  Biblical themes of the suffering servant are emphasized.

Easter. Jan Pienkowski. Alfred A. Knopf, 2015. (2-6)
The dramatic artistry of this book cannot be overstated.  Pienkowski's black silhouettes and gold ink against jewel-tone backgrounds are a modern illuminated manuscript.  The Easter story is told with  scriptural quotations from the King James Bible and lead the reader from the Last Supper to the Resurrection. 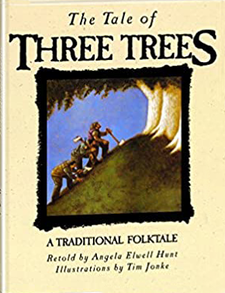 The Tale of Three Trees: A Traditional Folktale Angela Elwell Hunt.
Illustrated by Tim Jonke. David C. Cooke, 2014. (K-3)
Excellent choice for Easter or Christmas, this is the break-your-heart beautiful story of three trees each of whom have aspirations for their future and their lives.  What will their wood bring to their world?  None were able to guess the glorious, unexpected path that God chose for them.  Jesus's life and sacrifice and triumph narrated in a totally unexpected way.

Easter Stories:  Classic Tales for the Holy Season. Miriam Le Blanc, ed.
Plough Publishing, 2015.  (5-6)
These are classic short stories that can be read to older children at Morning Gathering and bring many themes of the season to life. Literary greats C.S. Lewis, Leo Tolstoy, Oscar Wilde, Anton Chekhov, Elizabeth Goudge and others contribute short works (not specifically religious) that speak to to themes of transformation, reconciliation, forgiveness, renewal, and rebirth.  Each story is illustrated with a lovely woodcut.  Medieval kings, animals, fairy tales, and fantasies all evoke the various themes of Easter.  Teachers will need to preview the various ones for suitability to your school.
Core Virtues Foundation Copyright © 2018