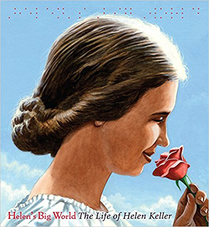 Helen’s Big World:  The Life of Helen Keller. Doreen Rappaport.
Illustrated by Matt Tavares. Disney, Hyperion, 2012.  (2-6) Lives to Learn From
​Many know the story of Helen Keller, an American child stricken blind, deaf and mute by early childhood disease, but who, with the help of her teacher Anne Sullivan, triumphed over all three challenges.  Few have told Keller's story as compellingly as Doreen Rappaport, or made it the visual delight provided by Matt Tavares.  Rappaport’s graceful prose draws the reader forward (her text is interspersed with quotes from Keller’s own works.)  Tavares’s illustrations make the book sing.  The book’s format (almost Big Book in scale) make Helen’s Big World appear a pre-school child’s book.  It is not.  Because of the content (how Helen learned to read, speak, and write; the nature of her friendship with Anne), it will be cherished by second graders to sixth graders alike.  Young readers will be awed by the persistence, and wonder of a child facing a dark and silent world, and the touching resolve of a dedicated teacher.  A story of friendship, grit, and human resilience. 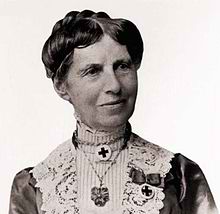 “I have an almost complete disregard of precedent and a faith in the possibility of something better. It irritates me to be told how things have always been done. I defy the tyranny of precedent. I go for anything new that might improve the past.”Civil War nurse and founder of the American Red Cross, Clara Barton fully embodies this month’s focus on compassion, faithfulness, and mercy. Her depth of compassion for others, whether school children, battlefield wounded, or victims of hurricanes and other disasters has been unmatched. Her own code was uncompromising: “You must never so much as think whether you like it or not, whether it is bearable or not, you must never think of anything except the need and how to meet it.”
A painfully shy girl, Clara grew up in a large family and was schooled mainly by her brothers and sisters. She began her nursing career at home, when one of her brothers fell ill, and she nursed him back to health. For years she taught school, and actually founded two schools – one in North Oxford, Massachusetts, and a second in New Jersey. But she found her life’s work during the Civil War, when her path-breaking service to the wounded on the frontlines earned her the title, “Angel of the Battlefield.” She went on to found the American Red Cross, which unlike its European counterpart, aided in disaster relief as well. A spectacular children’s book on Clara Barton has yet to be written, but read more about the life of this amazing woman.
Core Virtues Foundation Copyright © 2018