Hanukkah, the "Festival of Lights," is a Jewish holiday that celebrates the courage of the Maccabees, who led a revolt to reclaim their temple from Antiochus, and the miracle of light rekindled at the Temple's re-dedication.  The Maccabees relit the Temple menorah with one small vial of purified oil that should have lasted only a day, but miraculously burned for eight. Hanukkah, like Christmas, is an occasion for gift-giving and acts of generosity, particularly to the needy.  Some of the books we feature below are set at the time of Hanukkah and others explain the feast's origin.

A note about the separation of church and state:  the Core Knowledge Sequence (used in many public schools) and other strong-content based programs do not ignore the religious origin of holidays, nor do our laws require silence on these issues.  Well educated students should know that the feast of Hanukkah has biblical origins, and this is an excellent time to explain the ancient story. 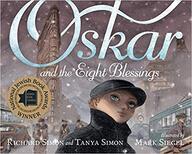 Oskar and the Eight Blessings. Richard and Tanya Simon.
​Illustrated by Mark Siegel.  Roaring Book Press, 2015. (K-4)
Generosity, Charity, Kindness
Young Oskar has fled Germany during the Holocaust (1938) and arrives in New York City to live with an aunt he’s never met.  Arriving on the seventh day of Chanukkah, cold and hungry, with only a photograph of his aunt and an address, Oskar finds the city enormous and his journey frightening.  With the kindness of many strangers, the young boy walks the hundred blocks to his new home.  A gorgeously illustrated, profoundly moving story of a boy's journey and NYC at its finest: a diverse people not afraid to extend kindness. Or as Oskar’s father says: “Even in bad times, people can be good. You have to look for the blessings.” This book could be enjoyed by older children as well because the message is timeless and the drawings of New York are intricate. 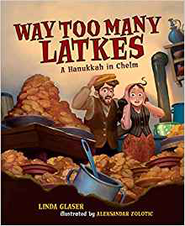 Way Too Many Latkes (A Hanukkah in Chelm)* Linda Glasser. Illustrated by Aleksandar Zolotic.  Kar-Ben Publishing, 2017. ( K-2) Hanukkah, Generosity
In the village of Chelm, it is the first night of Hanukkah, but Faigel has forgotten her favorite latke recipe. Her husband, Shmuel thinks they should ask the rabbi because he is so wise, but what does the rabbi know about cooking? Use all the potatoes, the hungry rabbi says! Same for the eggs and onions! Kitchen mayhem and a mountain of latkes result, feeding the entire (hungry) village. Bright, expressive illustrations carry the hilarity along.*Available on Epic! 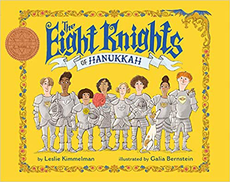 The Eight Knights of Hanukkah. Leslie Kimmelman.  Illustrated by Galia Bernstein. Holiday House, 2020.  (K-4) Charity, Courage
Children's love of fantasy and all things medieval ensure this humorous book's appeal.  On the eighth night of Hanukkah, a rampaging dragon (Dreadful) threatens to spoil all festivities. The Queen summons her Eight Knights to rescue the kingdom from the grasp of the dastardly beast who has scorched dreidels, scared off the potato peelers, wolfed down jelly donuts, and baked all the apples in the orchard.  Her knights (both male and female) are up to the task of exercising creativity, kindness, and "stupendous bravery" to defeat the foe. Howlingly funny surprise ending with medieval illustrations that keep adults and kids riveted. 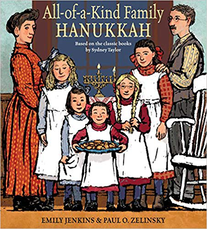 All-of-a-Kind Family Hanukkah.  Emily Jenkins.
Illustrated by Paul O. Zelinsky. Schwartz and Wade, 2018. (K-2) Hanukkah
The All of a Kind family is back, celebrating Hanukkah in their home on New York's lower east side. Each member of the family helps in preparation of the feast to come. Charming illustrations warm your heart. 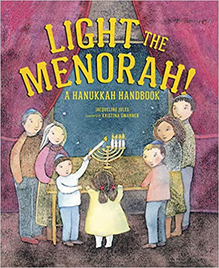 Light the Menorah: A Hanukkah Handbook. Jacqueline Jules.
Illustrated by Kristina Swarner. Kar-Ben Publishing, 2018. (K-5) Hanukkah
This is an informative and reverent guide to Hanukkah. It begins with the blessings and reflections for each night of Hanukkah in both Hebrew and English. Both the historic and rabbinic story of Hanukkah is explained, followed by the traditional recipes, games, songs and crafts. Lovely watercolors illustrate each section. This is a great book for Jewish schools and families, but it is also very helpful for anyone who wishes to understand the meaning of Hanukkah. 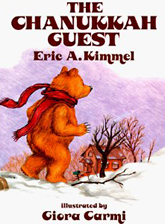 The Chanukkah Guest. Eric A. Kimmel
Illustrated by Giora Carmi. Holiday House, 1990.  (K-2) Generosity
Eric Kimmel’s humorous and charmingly illustrated tale of a nearly blind, elderly lady who lives in the forest and fixes potato latkes for the first night of Chanukkah, expecting the rabbi as her guest. In walks a bear instead, drawn from his slumber by the tantalizing aroma. She mistakes him for the rabbi, and a wonderful tale of hospitality and humor follows. 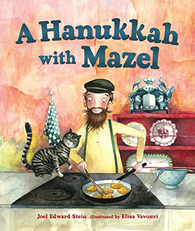 A Hanukkah with Mazel by Joel Edward Stein. Illustrated by Elisa Vavouri. Kar-Ben Publishing,  2016.  (K-2)  Generosity, Hope, Hanukkah
Delightful story set in late nineteenth century Russia.  Misha, a poor artist, befriends a skinny, lost cat, offers her milk, makes her comfortable by the fire, and names her Mazel (or "lucky" because she was lucky to have wandered into his barn). He then finds a unique way to celebrate Hanukkah. Misha can’t afford candles for his menorah, so he paints a menorah on canvas and “lights” the candles each night with his paints. The latke-loving cat brings him good luck, when his owner (a merchant peddler) appears and offers to buy Misha’s paintings. Lively illustrations. 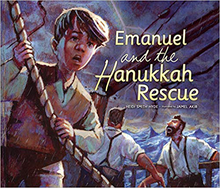 Emanuel and the Hanukkah Rescue.* Heidi Smith Hyde.
Illustrated by Jamel Akib Kar-Ben Publ. 2012. (K-3) Courage, Hanukkah
Emanuel’s father is a merchant in New Bedford, Massachusetts in the eighteenth century. Afraid of the persecution that they experienced in Portugal, the Jewish families of the town do not light the Hanukkah candles. Discouraged that they are not really free, Emanuel stows away on a whaling ship so he will not be bound by fear as his family is. However, a massive storm overtakes the ship and it returns to port for repairs. The lighthouse cannot be seen through the storm. The ship is guided home by the lights of the menorahs, now lit by the families, who were inspired by Emanuel. Bold chalk pastel illustrations light up the book.*Available on Epic! 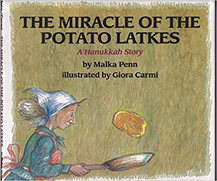 Miracle of Potato Latkes. Malka Penn
Illustrated by Giora Carmi. Holiday, 1994. (K-4)
Poor woman opens her home to those in need and finds her latkes multiply. 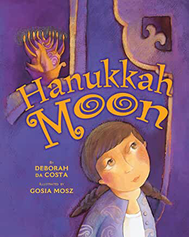 Hanukkah Moon. Deborah Da Costa. Illustrated by Gosia Mosz. Kar-Ben Publishing, 2007. (1-3) Hanukkah
This is Little Isobel's first visit to Aunt Luisa’s house since her aunt returned from Mexico. Celebrating Hanukkah with her introduces many traditions that come from the Latino-Jewish community, including watching and waiting for the new moon and a dreidle pinata.  Sweet and bright watercolors bring the story to life, showing the holiday from a different cultural perspective. 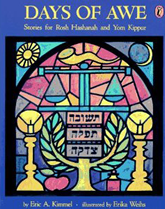 “The Samovar” in Days of Awe. Eric Kimmel
Viking Child Books, 1991. (Generosity, 2-6)
A mysterious vagabond asks an old woman to care for his special silver urn (“samovar”) while he is gone. She does so at personal cost and inconvenience, but in the end is rewarded for her selflessness. A Jewish folk tale that embodies the virtue of charity.

The Gift. Aliana Brodmann
Simon and Schuster, 1993. (2-4) Generosity
A young girl tries to figure out how to spend her Hanukkah geld, and comes to understand that the best gift is the gift she can give to others. 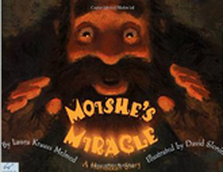 Moishe’s Miracle:  A Hanukkah Story.  Laura Krauss Melmed.
Illustrated by David Slonim.  Chronicle Books, 2005. (2-4) Generosity
​Moishe, a generous Jewish milkman living in a small village, is forever helping his neighbors. But his resentful wife insists his charity has left her without flour or money to make traditional potato latkes for Hanukkah.  Moishe is literally sent packing to board with the cows, but he is rewarded for his efforts with a magical pan that makes latkes.  He is also given a warning that he alone must use it.  When his wife tries to use it, the hijinks begin…. Beautifully written, stunningly illustrated. 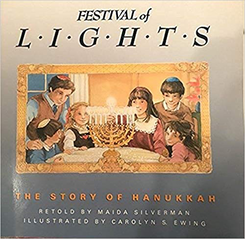 Festival of Lights:  The Story of Hanukkah. Maida Silverman.
Illustrated by Carolyn Ewing.  Aladdin, 1999.  (2-5) Courage, Hope
This reverently told, colorfully illustrated text recounts the origins of this feast (Greek ruler Antiochus taking the Jewish temple, and the Maccabees reclaiming and rededicating it), how subsequent customs relate to the original feast, and what the customs are (ranging from the Dreidle game to lighting the Menorah.) 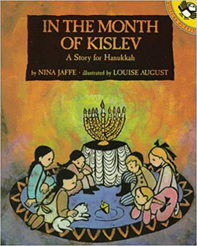 In the Month of Kislev: A Story for Hanukkah. Nina Jaffe.
Illustrated by Louise August. Viking Child Books, 1992. (2-6)
Impoverished Mendel the Peddler and his children, along with a wise rabbi teach their wealthy and not-very-generous neighbor the meaning of charity. Humorous and wise. 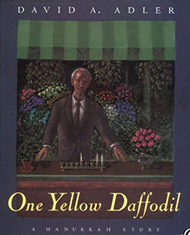 One Yellow Daffodil: A Hanukkah Story﻿. Adler, David. ﻿​
Harcourt, Brace and Jovanovich, 1995. (4-6) Hope
Profoundly moving story of an elderly Jewish man, who survived the horrors of Auschwitz by clinging to the promise of one daffodil in the death camp. Later in New York, he rediscovers the meaning of hope through Hanukkah and a family who reaches out to him. Not appropriate before 4th grade. ​
Core Virtues Foundation Copyright © 2018